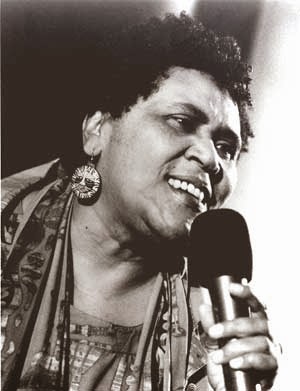 The first time I saw Gwen Avery was in 1974, at the Amazon Music Festival in the mountains above Santa Cruz.  What a scene.   Two hundred naked women under the redwoods, listening to incredible music by incredible women on the outdoor stage.

But Gwen wasn’t a scheduled performer, oh no.  At some point, to escape the sun, my friends and I drifted into the clubhouse.  Perhaps we needed a wee break from the intensity.  We were all tripping on LSD.  At the piano in the clubhouse, sat a naked bearded African-American Amazon, playing and singing her heart out with joy and abandon.

She had no audience until we walked in.  She was making music for herself.  We listened, spellbound.  We thought we’d died and gone to heaven.

Over the years, Gwen became my friend, my hairdresser, my housemate, and the subject of my still-to-be-finished documentary.  She performed at a benefit for my political campaign.  I produced her several times.  In all the times I saw her perform, only once did she fail to move me out of my chair, at one of the Russian River festivals in Guerneville.  I thought, “Well, she can’t hit it every time.”  Years later, when she was talking for my camera about her deep and abiding joy in performing, she said, “There was one show when I just couldn’t find it… One of those times at the Russian River Festival.”  I was stunned.

Gwen just loved music, loved to party.  She WAS the party.  She was never happier than when she was creating a party wherever she happened to land.  One Martin Luther King Day, I went to a concert at Glide Church, where Gwen was part of the choir.  After the concert, she suggested we go to Osento, the women’s bath house in the Mission.  We were in the small sauna, where we were joined by two German women who were visiting San Francisco for the first time.  Of course, Gwen started talking to them, and then she started singing.  Show tunes.  That’s the only time I ever heard her sing show tunes.  I didn’t even know she knew that many of them.  Now, that was a tiny sauna.  The four of us sat on the two benches, facing each other, our knees almost touching.  And Gwen was singing FULL OUT, flinging out her arms, practically squashing those poor German girls. It was alarming.  Were these unwary visitors to the Gwen Party upset?  Offended?  Overwhelmed?  I studied their faces — sheer bliss. They thought they’d died and gone to heaven.  This would be their most cherished memory of San Francisco.

Because I was filming Gwen, I got to see many of the performances that took place in larger venues the the Osento sauna.  I also had the great privilege of going with her to visit her mother in Cleveland and her family in Verona, Pennsylvania, where she grew up.  I was very moved by her family’s love for her and their warmth and acceptance of me.

A few years ago, I produced Gwen for Support Women Artists Now Day — or SWAN Day, the last Saturday in March.  The performance took place at Bird & Beckett in Glen Park.  Gwen dropped by an hour before the show, to check out the place, a bookstore that hosts lots of jazz and poetry readings.  She left to go change from her grubby jeans and shirt into her performing duds.  The audience started arriving… and arriving and arriving.  The place was packed!  I felt a certain pride at having done a good PR job.

When it was time for the show to begin, Gwen appeared… in the same old clothes!  She ALWAYS dressed for a show!  She leaped onto the little stage… and I realized she was drunk.  I had never seen her high for a performance.  I tried to somehow introduce her.  She lifted me up and gently threw me off the stage.  She was a mighty strong woman, and she was in charge.  There was nothing for me to do but go in the back of the bookstore and hide from the disaster that was bound to ensue. Oh, WHY had I done such good publicity?  I stood as far away as I could get, my back to the stage, bemoaning the fate of the audience.  Then I realized that my body was moving to the music.  My body could not NOT move to the music.  I turned around and approached the stage.  Gwen clearly had no plan.  The possibility of the show falling apart existed at every moment.  We all leaned forward, totally focused.  This was not being cradled in the arms of a consummate performer.  This was watching a great artist walk the tightrope between form and chaos.  Gwen pulled it off.  The audience rose to its feet for a delirious standing ovation.  I thought I’d died and gone to heaven. 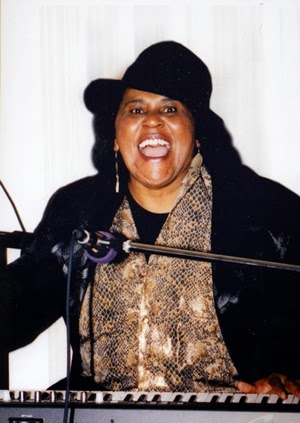 And now Gwen has died and gone to heaven.  I don’t know if there really is a heaven, but I do hope that Gwen’s soul has found peace.  She rarely found peace outside of music when she was in this world.   Oh, Gwennie, there is still so much I wanted to do with you…. I’ll finish the full-length documentary now.  I promise.

Link below is to "Jukebox Baby," my 14 minute documentary on Gwen.
http://www.youtube.com/watch?v=eNo1d1ZDJfU
Posted by Terry Joan Baum at 1:49 PM 9 comments: