Last year, I marched in the Gay Pride Parade in the beautiful town of Gouda, in Holland. I loved being in that small, ancient city.   This year, back home -- I tell ya, it's hard for me not to be jaded about the Pride Parade in San Francisco.  We have a big problem with jadedness in San Francisco.  That's why we need people to come visit and remind us what a wonderful place we live in.

Jennifer, my friend from Long Beach, had a film in the gay film festival and stayed with me for a week.  She was delightfully un-jaded.  When we walked around, she pointed out beautiful details on buildings that I've walked by hundreds (thousands?) of times.  Actually, now I remember that, when I visited her in Long Beach, I noticed wonderful things in HER neighborhood that she'd overlooked!  But basically my friends in Long Beach seem to really be proud of their city, whereas long-time residents of SF are in a perpetual state of mourning for the past.

It's RIDICULOUS!!  Activism to make the city better makes sense.  But grieving -- what a waste of energy.  Especially if you're in the upper .001% of fortunate people on the planet!  Which I am, just in case you're wondering.

ANYHOW, in San Francisco, we have a Dyke March on Saturday, the day before the big march. The Dyke March isn't really big on contingents, like the big march.  It's mainly a whole buncha dykes, many very colorfully dressed, taking over the street.  Men are asked to show support by standing on the sidelines.

I mentioned to Carolyn the day before the march that I didn't think old dykes would be represented very much.  "Well," Carolyn said, "Then we have to march!"  Carolyn is not a dyke, but she ain't a man either, so she's entitled to march.  Anyhow, nowadays, she marches as Goddess-Zilla.  I'm not sure Goddess-Zilla has come out yet.  I'll have to talk to Carolyn about that.

I decided to make a picket sign that said "Old Dyke."  Then I revised my sign to say "GOOD Old Dyke."  I was inspired by some writer I read recently who said that she wanted her epitaph to read "She was a good old dyke."

So here we are: 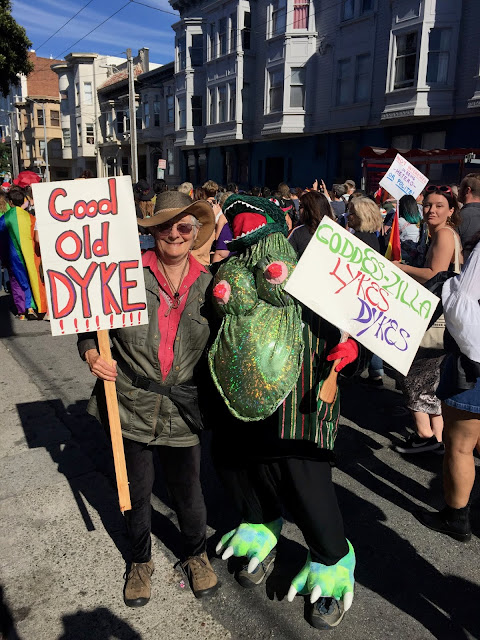 I was amazed at the response to my Good Old Dyke sign.  The concept seemed to touch people.  So many  patted or even pounded their chests to show me that their hearts were moved.  I had never experienced that before.

What does it mean to be a good old dyke?  I'm not sure, even though I find comfort in the idea myself.  Maybe, there's power in claiming two identities that have been despised -- "dyke" and "old" --  and declaring them good.

I confess that I don't see myself as a good old dyke.  I think it implies someone who's a stalwart butch, which I'm not.  But I've always loved butches.  I think Lorena Hickok, Eleanor Roosevelt's lover and the focus of my play, was a good old dyke.  But, not only would she never carry that picket sign,  it was a source of shame and self-hatred for her.  Maybe that's one of the reasons I am passionate about performing the play.  I want to reclaim Hick as a good old dyke.

Here I am 25 years ago marching all by my lonesome in the Big Gay Pride Parade. 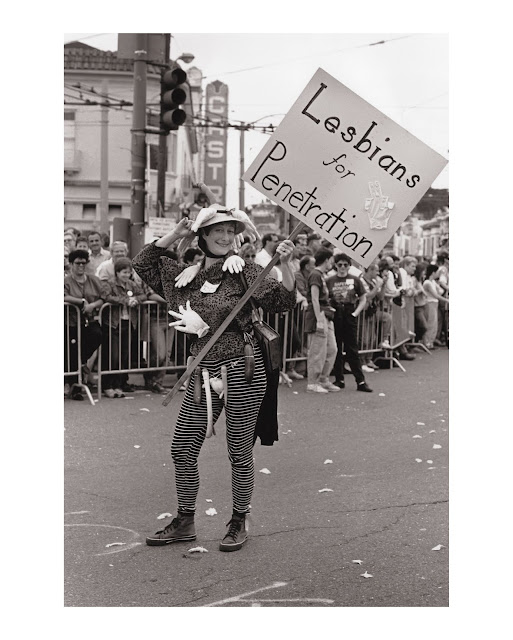 It was one of the greatest performing experiences of my life.  Maybe THE greatest.  I pranced all the way down Market Street, from Castro to Civic Center.  As I approached, thousands and thousands of people burst out laughing.  I was carried along by the gigantic wave of laughter that met me.  I suffered from chronic back pain at the time, and all that prancing didn't do my back any good.  But I couldn't have cared less.

It's been a journey.

Posted by Terry Joan Baum at 6:08 AM No comments: