Went to the Hirschfield exhibit at the New York Historical Society, which happens to be the closest museum to where I'm staying.  Hirschfield is the  illustrator/caricaturist  who was a fixture in the New York theater scene with his lively and exaggerated line drawings of Broadway plays and stars.  He captured the ENERGY of the actor.

Below are drawings of the first production of THE GLASS MENAGERIE by Tennessee Williams, the Marx Brothers, and a production of a play at the Moscow Art Theater in the Soviet Union. If the Marx Bros. drawing looks like he copied it from someone else, that's because this BECAME the iconic image of the crazy M Brothers.  In fact, Groucho, upon seeing the artist's exaggeration of his hairdo, told the movie studio that he wanted his hair to look exactly like that in his next movie!

Hirschfield lived a happy, productive and LOOONG life.  He lived to 99, did his last published drawing --  of Tommy Tune for the NY Times --  six months before he died.

In an interview, he said, "I have absolutely no interest in landscapes, in drawing nature.  I want to sit in a cafe and observe PEOPLE, watch a play and capture the actors.  Nature doesn't interest me.  The Grand Canyon just looks like a decayed molar, magnified a million times.   PEOPLE -- that's what I love."

His favorite subjects where what he called "GLANDULAR actors -- with bulging eyes and thick lips, the ones who are bigger than life."  He bemoaned the more realistic "arid" style of of today's actors.

It made me think about making Hick bigger, even bigger than life.  I've been going in that direction anyway.  After all, her STORY is bigger than life.  A secret yet not-so-secret romance with the First Lady in tumultuous times.  I have to keep reminding myself that the context of the story I'm telling is BIG!  I'd like to create a performance that Hirschfield would find inspiring to draw.  I ain't no decayed molar.

www.terrybaum.com
Posted by Terry Joan Baum at 10:39 AM No comments:

HICK WRITES TO ELEANOR FROM IOWA 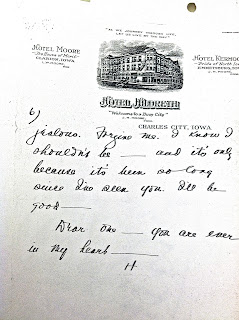 This is the sixth page of a letter Hick wrote when she had her job traveling around the country reporting on economic conditions and New Deal programs to Harry Hopkins and FDR.  Most of the letter is telling ER about her job.  But on this page, obviously she’s written something  in an earlier letter to ER that she now regrets.  Hick was always apologizing to Eleanor.  She just wanted more than her lover could give her.  And the public attention she got when she was with Eleanor was unbearable to Hick.  Hick was used to be the observer, not the observed.   Hick was temperamentally unsuited to the situation she’d gotten herself into.  But she loved Eleanor too much to ever walk away from her.
Posted by Terry Joan Baum at 7:24 AM No comments: