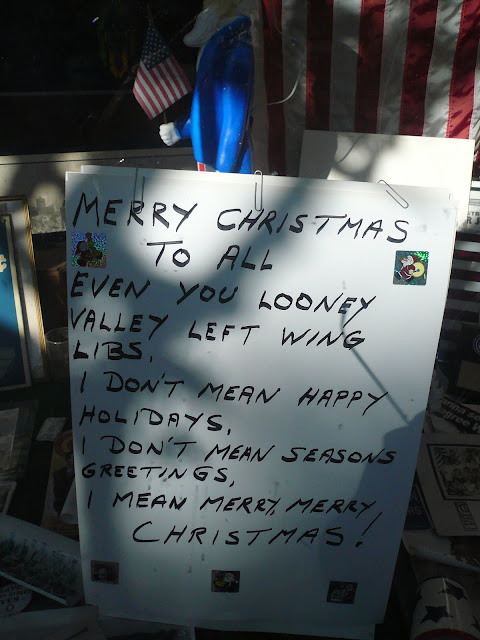 Posted by Terry Joan Baum at 11:49 AM No comments:

Pat Bond -- lesbian actress, writer, and comedienne -- was my close friend.  She toured the country as a solo performer, telling stories about her life as a dyke in San Francisco in the 50’s, and as a WAC in the army during the terrible witch hunt against gay people after World War II.     For thousands of gay people, Pat was the first out lesbian they had ever seen on stage.  Pat laughed at everything -- straight people, gay people -- especially herself.  She used to say, “I had a great pick-up line for the bar scene:   ‘I’m going to take you home and fuck you until you’re blind.’  And then I’d get her home, and I had no idea what to do!  I didn’t know what the hell I was talking about!”
This is the story of Pat’s last Christmas Eve party.
Pat always had a Christmas Eve party. This was the ONLY party she had, and it was a very big deal to her. If you were her friend, you were REQUIRED to attend.  Not that she decorated or cooked or did anything other than set up her tiny aluminum tree and open some cans of marinated mushrooms and stuffed grape leaves.  No, it was up to us, her friends, to bring presents and food and drink to her studio apartment on Christmas Eve.
Pat always felt lonely, like an outsider.  She used to say, “When I was a baby, I was stolen from the gypsies by a band of rednecks.”  As Pat got older and frailer and unable to perform, she became terrified of dying destitute, abandoned, forgotten. Her bitterness drove people away.   I couldn’t walk away from Pat.  I did try.  But she called me up and yelled at me, “What the hell’s the matter with you?  You’re supposed to be my friend, for Christ’s sake!”  So we started seeing each other more.
Then in the Fall of 1990, Pat ended up in the hospital with a diagnosis of lung cancer.   She told me, “Don’t tell Gail.  She doesn’t give a damn.”  Gail, Pat’s ex, was the great love of her life.  Of course I did tell Gail.  She said,  “Count me in. I always knew I would be there for Pat when she got sick.” The next day Gail appeared in Pat’s room, bearing flowers and a book to read aloud.  Pat beamed with joy.
And then there was Little Sun, a magical butch country girl with long braids and cowboy boots.  She didn’t know Pat very well, but she announced “Count me in too .”   I thought of the three of us as a tripod. A stool doesn’t need four legs, but it’s got to have three! Right?  So Pat had her tripod.
When she realized that she would be taken care of -- that there was enough -- enough friends, enough support , enough medical care, she became very open and loving.  Spending time with Pat was a gift.
Around the middle of December, Pat said, “What about my Christmas Eve party?!?  I can’t disappoint everyone!  It’s a tradition!”  I promised Pat a party in her hospital room and invited ten friends. Pat got weaker and weaker.  Would she even survive until Christmas Eve?  By December 23, she was in a coma -- or so we thought until one of her visitors got up to say goodbye to her.  She suddenly opened her eyes and said, “You’re coming to my party, aren’t you?”
On Christmas Eve morning, I got a call from the hospital that Pat was fading fast. Gail, Little Sun and I rushed to her beside.  Pat seemed unconscious and was breathing in a very labored, rasping way.
We stood around her bed, holding hands.  What to do?  It WAS Christmas Eve, and Pat loved Christmas carols. Very tentatively, we began singing.   Our voices blended beautifully. Our singing got stronger. “And heav'nen and nature sing, and heav'nen and nature sing, and heav'nen and heav'nen and nature sing!”  The sound was really lovely.
Gail and Little Sun and I had talked endlessly on the phone with each other, we’d conferred with doctors together, but we had never sung together until that moment. Who would have thought our three voices would make such a joyful noise?  We harmonized, sometimes three parts, sometimes two, and then gliding back to unison.  Our grief that Pat was dying deepened our joy in singing to her.  When we ran out of carols, we started on folk songs.   As we sang, Pat’s breath came at longer and longer intervals. We kept singing.

“Michael Row the Boat Ashore” is a great song for an occasion like this.  It has a lot of verses, and when you’re finished with those, you can make up your own.
(SINGING)
It’s Pat Bond’s famous Christmas Eve party
Hallelujah
I’m glad I’m here, though she ain’t feeling too hearty
Hallelujah

At some points, it seemed like Pat had stopped breathing, but then... another labored breath. We kept singing. We kept singing and singing, and finally there were no more breaths, and we kept singing. We sang for a long time after what turned out to be Pat’s last breath.
Then we were quiet.  Gail, Little Sun and I had sung Pat across the bridge.   Imagine that!
Then the guests started arriving, with presents and cake and champagne.    Pat’s last Christmas Eve party. Here we were, all lesbians and gay men, brought together for one last time by Pat.  As Donald pointed out, Pat had always had a great sense of timing. We unwrapped the little presents we had brought and traded them around until everyone had something they liked.  Charlotte poured everyone a glass of champagne and we stood around Pat’s still body, toasting this courageous lesbian pioneer, this great storyteller, this loyal and difficult friend.  We cried and talked and laughed about this  woman who had touched us all so deeply.  We felt her spirit hovering over us.
People slowly left, one by one.  Finally, it was just Gail and me. Gail said she wanted to stay with Pat until the people from the mortuary came to take her away.   I took one last look at Pat.  Gail sat close, holding her cold hand.  If Pat could have spoken at that moment, she would have announced in her brash, honking voice, “Now, THAT was a great Christmas Eve party!”