I had a Party to Impeach at my house on Saturday, Feb. 17 in San Francisco.  This was one of the many Parties to Impeach organized all over the country by Tom Steyer, the billionaire who's working to create a grassroots movement to get The First Toddler away from the nuclear football. I had 25 guests -- lots of women, both lesbian and straight, and two men.

We read aloud all the talking points the organizers sent us -- why impeach, how it's done, the history, why we should not let the prospect of Pence immobilize us.  We had very stimulating discussions.  What a wide rage of opinions among all us Trump-Loathers!  Every Party all over the country was supposed to phone Nancy Pelosi during the party, because she opposes impeachment.  That is a huge obstacle, since she leads the Dems in the House, which is where impeachment must start.  EVERYONE IN THE COUNTRY!  And she's OUR (as in San Francisco's) representative!!  What to do?!?  (Full disclosure:  I ran against her in 2004 because she supported the invasion of Iraq.)

There's a strong Democratic candidate running in the primary against Pelosi.  Since we have the top-two system, if Stephen Jaffe comes in second, it would be him and NP in the general election.  That would give him a lot of time to hold her feet to the fire about impeachment.  After all, she's our REPRESENTATIVE, and the great majority of the people she is supposed to represent want The First Toddler OUT of the White House!  What her constituents want should mean something to NP, but it doesn't.

There was a group of Code Pink women at the party who have been trying to get through to Pelosi -- and failing -- for years.  Maybe decades!  They and I agreed that we should meet with Stephen Jaffe and push him to make impeachment part of his platform.  So that's our plan.

We wrote 88 postcards to Pelosi and also the Dems who already support impeachment.  We also wrote postcards to the 10 Senators who receive the most money from the NRA, telling them they would burn in hell for their sins.  At least, that's what mine said.  Then we took the photo below.  People were extremely happy to be meeting and doing something, even though, when we talked, there was a great diversity of opinion on what to do and how to do it.

IF YOU LIVE IN THE BAY AREA AND WOULD LIKE TO LEARN ABOUT FUTURE EVENTS I MIGHT ORGANIZE, PLEASE TELL ME. 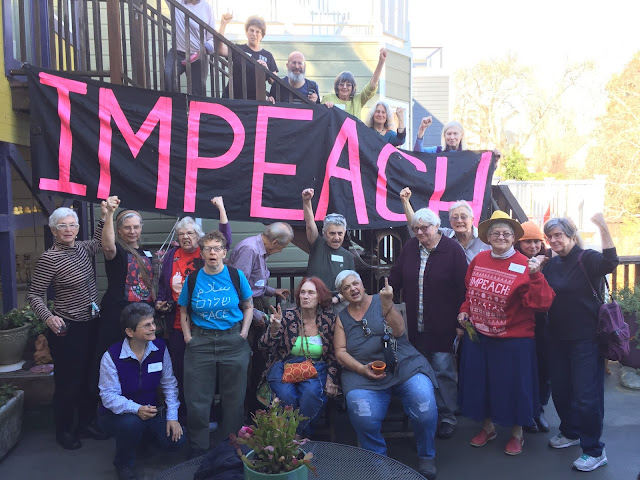