Posted by Terry Joan Baum at 8:06 AM No comments:

Posted by Terry Joan Baum at 10:11 PM No comments:

BAUMBLOG: TAKING THE TRAIN WHILE BLACK

Posted by Terry Joan Baum at 12:36 PM No comments: 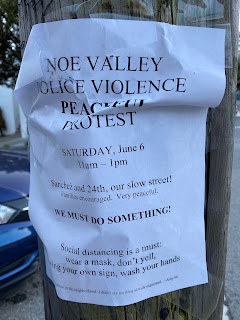 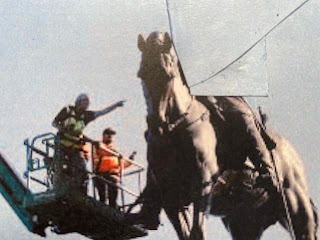 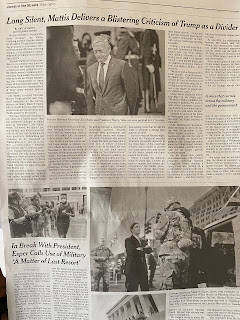 Upper Headline:  Mattis Delivers Blistering Criticism of Trump as a Divider
Lower Headline:  In Break With President, Esper Calls Use of Military "A Matter of Last Resort"
And now  Jim Mattis, Trump's former Secretary of Defense, is speaking out against using the army against civilian protesters!  It turns out that former Marine (!) General Mattis is the most respected military man alive -- worshiped by the Marines and deeply honored by everyone else in the Army!  And he believes in the right of citizens to protest, even if the fringe contains some anarchists and looters!  I tell ya, you can't make this stuff up.
Could it be that there is enough goodness in the souls of enough individual Americans that, when it's all combined, it will be enough save this nation?
And then there's current Secretary of Defense Mark Esper, who accompanied Trump on his ill-fated and idiotic Bible-flaunting photo-op.  Esper is now walking himself back from his own disastrous handling of the D.C. protesters and calling the use of the military "a matter of last resort."
So maybe we won't have civil war after all.  Maybe the push is finally coming to shove and the American people are saying
NO to Trump and
YES to looking racism and injustice in the face.
4.  EXCELLENT LINKS
I have found that the late-night comics/commentators are quite visionary and instructive.  Each person says at least one thing that helps me understand the situation more deeply.  Their talks empower me.  And of course, they're entertaining.
Steven Colbert:  CITIZENS WILL NOT BE SILENCED
Trevor Noah:  PROTESTS SWEEP ACROSS AMERICA
Now, John Oliver is a bit of a mixed bag.  But he's absolutely brilliant and a deep, radical thinker.  His show is only once a week.  That gives him time to create a brief documentary on that week's subject. He does sometimes have a very juvenile sense of humor, which I CAN'T STAND.  But he's also hilarious and very serious.  This week's subject is, very simply:  POLICE.
WELL, BLOGGELINIS, I THINK THIS NEW FORMAT WILL EVENTUALLY WORK OUT.  IT'S BEEN A BIT ROUGH THIS FIRST TIME.  BUT I'VE FIGURED OUT HOW I CAN RETURN TO THE BEAUTIFUL AQUA PAPYRUS FONT NEXT TIME, WHICH I FIND SO PLEASING AND I KNOW YOU ENJOY TOO.
STRENGTH & KINDNESS TO YOU ALL.         Terry
Thanks to Rosalia Stamatakos for the links.
Posted by Terry Joan Baum at 11:29 AM 3 comments:

Posted by Terry Joan Baum at 9:34 AM No comments:

Posted by Terry Joan Baum at 9:31 AM No comments: