Most important first:  If you can give some money to the survivors of the disastrous Camp Fire, that would be a great thing to do.  I got this info from my cousin, who used to live in Paradise:


Dear Terry:  Here's a link to the regional NPR station, with a list of many local organizations.
Miriam
http://www.capradio.org/articles/2018/11/12/how-to-help-victims-of-the-camp-wildfire/#items

I decided I also wanted to give a donation to help lesbians who were impacted, because lesbians in general have less money than others and less family support than others.  This is the Go Fund Me page of two dykes with five dogs who lost their home:

This information was sent to me by Susan, of Old Lesbians Organizing for Change.  OLOC is the place where I find the people who are most like me.

In San Francisco, we're into our eighth day of Beijing-style air. 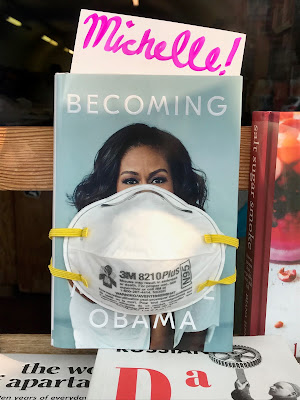 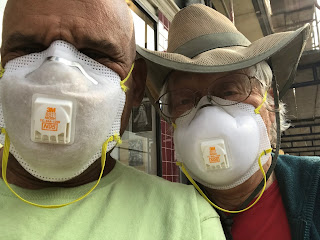 
Last year, with the Santa Rosa fire, it was "only" four days of smoke in SF.
Face masks, cancelled events, antsy unexercised poodles -- these are all such minor inconveniences.  And yet we have a looming feeling that our lives have changed forever.  It seems that we in California are going to have to make some drastic changes.  But that takes political will!  I pray we have it.

At least the election gives me hope.  I helped flip a Congressional seat from Republican to Democrat!  I canvassed for Josh Harder, in the Central Valley.  I've canvassed -- walking door to door, talking with folks and recording their info --- in many places, and the people in Turlock were the friendliest I've ever encountered.  Often, people are very surly to find some passionate political partisan on their doorstep.  Not the Turlockians!  Perhaps now people have a deeper understanding that it really does make a difference who is elected.  Or maybe it's just that Turlockians are super nice.  Or both.  Whatever, it was actually enjoyable.

It took what seemed like a long time for Harder to be declared the winner.  It's always true that the early vote count skews conservative because the mail-in votes, which are counted before the polls close, skew conservative.  But gradually, as all the votes got counted, more and more Democrats have won.  Yes, it's good news.  But still I find it incomprehensible that, after two years of Trump, millions and millions (and millions) of people voted Republican.

I have to say I've been in a bit of a numb state since the Pittsburgh synagogue killings.  I went with Miriam to her synagogue in Modesto for a special Sunday performance by an opera singer.  There was this note on the bench outside the door: 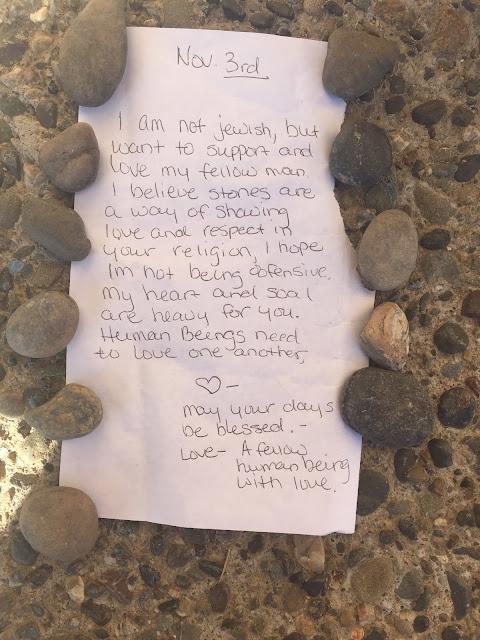 Eleven stones for eleven deaths.  I cried a little, for the first time.  It was very touching and perhaps counteracted the ominous feeling created by the fact that we weren't supposed to go into the synagogue until the off-duty policeman arrived.  This precaution was of course a response to what happened in Pittsburg.  After a bit of discussion because the policeman was late, people decided that, despite the new rule, we were safer inside the building than standing in the parking lot.  New discussions for new times.

But then my friend Elizabeth picked me up and took me to one of those places on earth that lifts your spirits and makes you feel awe at this still-beautiful world: 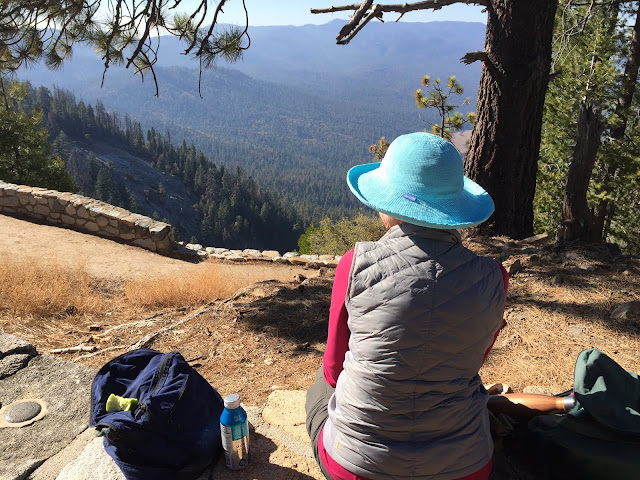 I hadn't been there for 35 years.  Thank you, Elizabeth, for taking me there.

And then I went home to smoke and my beautiful tree dahlias.

Had a lovely tea in celebration of the tree dahlias.  We weren't outside much  because of the air, but we still had a great time.  So life is changed and life is the same.  And I am particularly blessed with a home and friends and poodles and tree dahlias.  And the Democrats control the House.  Hard to embrace everything at once.  No?
Posted by Terry Joan Baum at 11:26 AM No comments: