"AND A LITTLE CHILD SHALL LEAD THEM...."

FROM THE FUNNIES PAGE OF THE SAN FRANCISCO CHRONICLE, MARCH 24, 2018 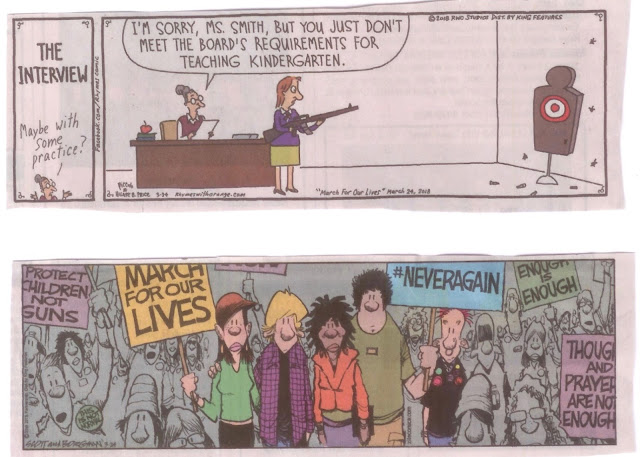 Folks, I wrote long and thoughtfully (at least I thought so) about the March for Our Lives and these wonderful responses to by cartoonists Hilary Price ("Rhymes with Orange"), and  Jerry Scott and Jim Borgman ("Zits").

And then I accidentally deleted it all.  And now it's past midnight.

Let me just say I'm terrified and deeply moved by what's going on in our country.  I have always believed in the power of democracy, of people working hard to elect other people who feel like them about the important issues in our world.   Like you all, I'm in despair over Crump.  But I am so excited by these kids saying, shouting, repeating, "Get rid of assault weapons or we will vote you out of office!"  That is, indeed what democracy is all about.  And voting is just the teeny tiny tip of the iceberg.  It's a fuck of a lot of work to elect good people, especially because:
But there really is no choice but for us to do this work.  We must do it for our world, for our children.

(Full disclosure:  I don't actually have children, but I do have a niece who is very dear to me who calls me her Parental Unit.)

We gotta. Let's take back our country.  We are the majority.  That is clear.  Admittedly, they have almost all the guns.  But, hey, the kids have the guts to face this evil.  We must follow their example.

What are you doing in the month of October?  Why don't you think about spending as much time as you can working on a campaign?  It will alleviate your despair.  I guarantee it.   And, yes, you'll feel awful if you work real hard and you lose.  But not as awful as you'll feel if you sit on your butt and hope for change.

WE CAN DO THIS.