UPDATE OF LAST BLOG:  Finally got Stephanie's great photos of our performance at the University, on Friday, March 18:

On Sunday, March 20, we arrived at Punto Gozadera, an eight-month old feminist women's center/cafe/art gallery in downtown Mexico City.   It was in a great and funky space next to a big church: 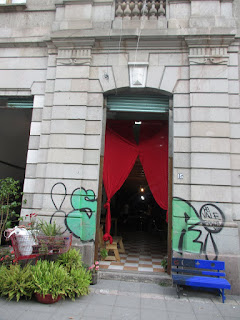 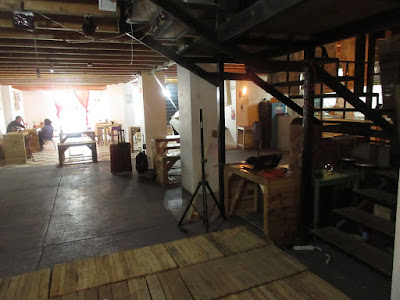 Punto Gozadera describes itself as a "cultural restaurant for feminist encounters."  I'm still not quite sure what the name means.  Mariana in Oaxaca said it has to do with multiple orgasms, and these women are extremely upfront and in your face about the power of their sexuality.

Here's the stage where we would perform that evening:
And just in case you can't read the banner in the back: 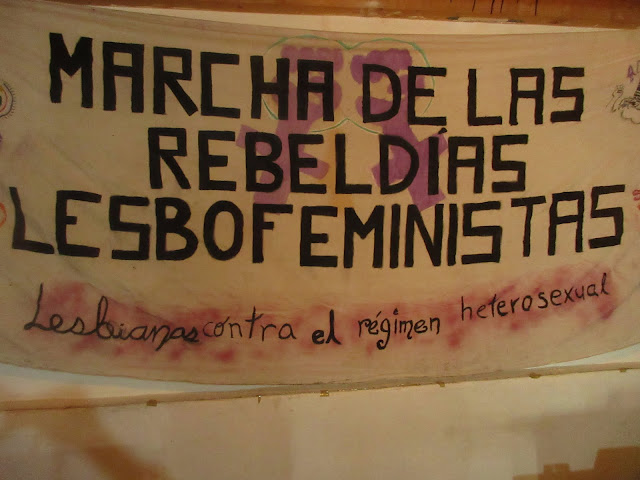 The place was filled with young dykes and feminists.... 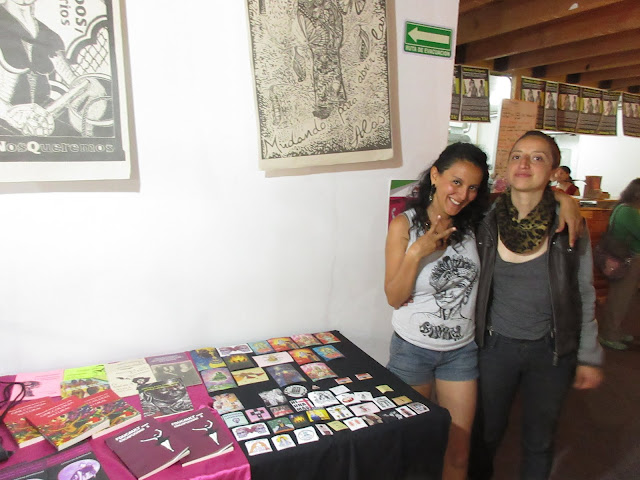 On the card tables, for sale, political and sexual images: 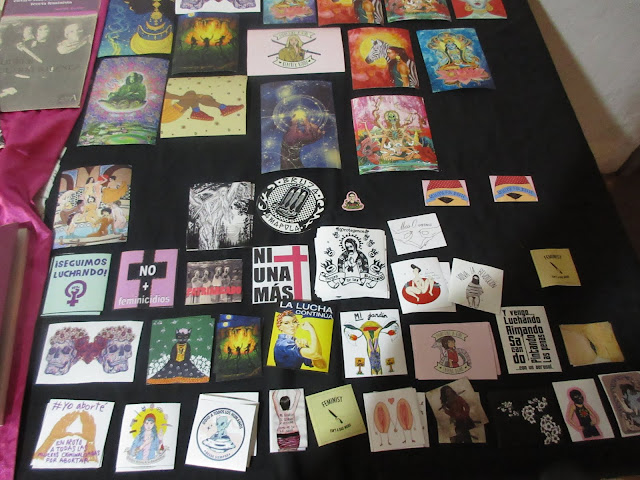 I mean, these young women are very clear that they love their bodies and are NOT in any way ashamed:
Lots of posters for events at La Gozadera that we wished we'd attended: 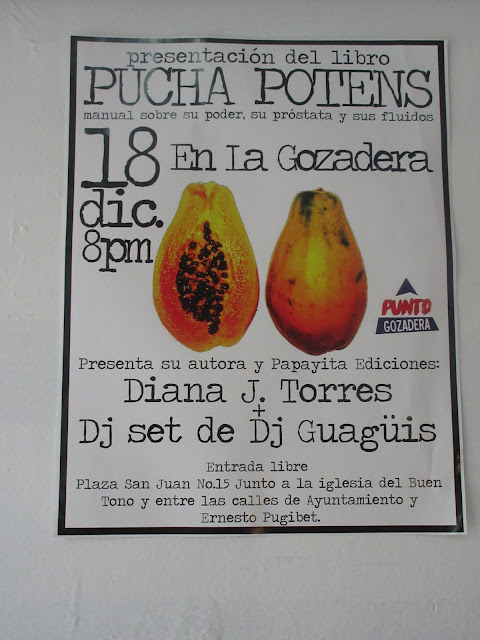 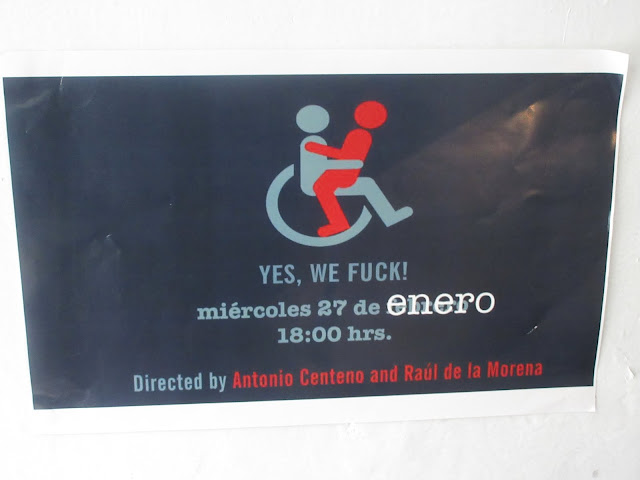 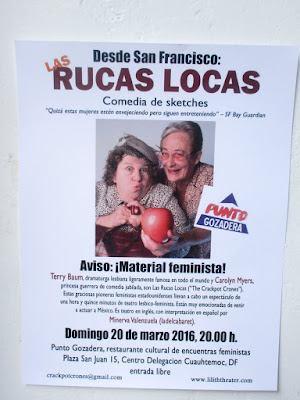 Carolyn and I felt like we'd found our own sweet spot, with good vegetarian food! 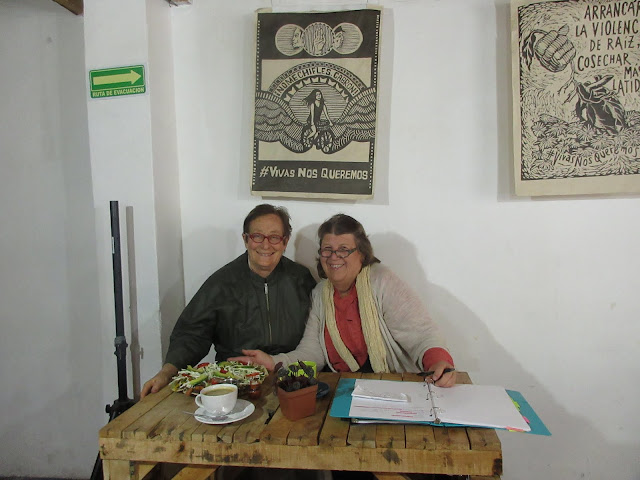 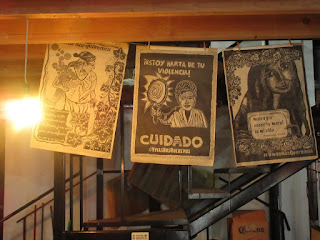 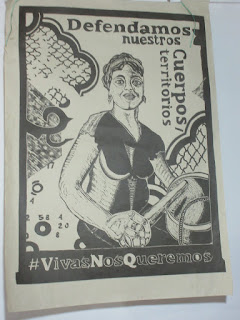 This poster was very disturbing:
I'm not sure if this refers to an actual murder disguised as a suicide, or actual suicides where women were driven to such despair by the patriarchy that they killed themselves.  With all the crosses, the artist is talking about many deaths.

To Carolyn and me, it was exciting to see this deep, vibrant feminist response in Mexico.  Not that so many of the same things don't go on in the U.S.  But there's a different level of threat and oppression in Mexico.  Women have been sentenced to prison for 30 years for the crime of having an abortion.  And then there's the disappearance of all those women in Ciudad Juarez.

Carolyn and I, as older women, didn't experience any of the street harassment by men that young women often endure.  But Carolyn told me that twice, when she was out walking, older men who were chatting blocked the sidewalk.  Even though her bad knee forced her to walk with a cane, these men glared at her and refused to move aside.  She felt, at that moment, their contempt for her as a woman.  They WOULD NOT make way for her!

But in general, we found Mexicans overwhelmingly kind and considerate.

This poster, so simple, moved me deeply:
Finally, we got our backdrop up.  Of course we needed a photo of the woman, Libertad, with the word "Libertad" on our backdrop: 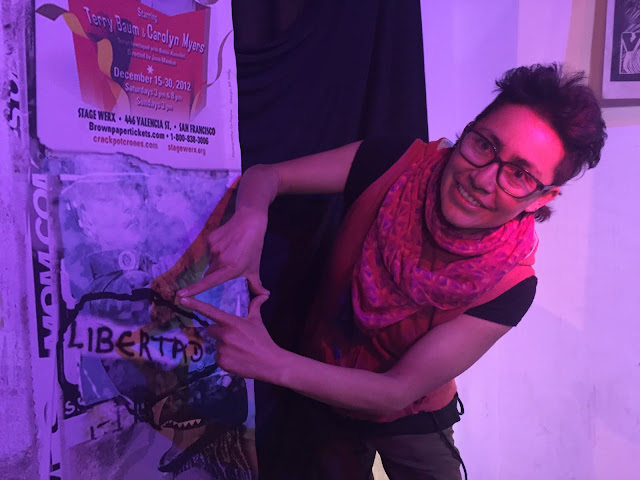 And then it was time for the audience to arrive! Would they show up?  This was a concern at ALL our performances, but especially the ones around Easter vacation.  Supposedly, everyone LEFT Mexico City for Holy Week, as it's called. Carolyn worried much more about audience numbers than me, since she had done all the work to get the bookings and do the publicity.  In fact, the whole Mexico adventure was her idea and her work.  I was just happy to be along for the ride.

But it turned out the place was PACKED!  They were a wild crowd, hooting and hollering from the beginning.

Again, as at the University, there were almost no native English speakers.  So that meant that we had to be big and physical in our acting.  Here's a moment from the "Coming-Out Transformations" that shows Minerva narrating in Spanish while we're frozen in position, waiting for her to say "Back to the scene!" in English, before we go on: 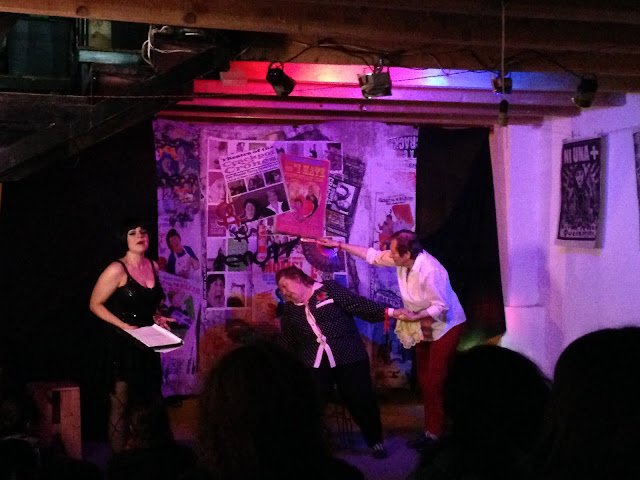 The response to us was overwhelming.   These young Mexican women loved them some Crackpot Crones!  During the Horror Movie Coming-Out, where I transform into a lesbian werewolf -- the only scene we performed in Spanish -- they were howling along with me from the very beginning.  We've never gotten that reaction before.

And, because La Gozadera is also a cafe, everyone hung out afterwards and chatted.  People were not just enthusiastic.  They were GRATEFUL.  It was a response that reminded us of the 70s with Lilith Theater, and the early 80s with DOS LESBOS, when we had the feeling we were doing something that was NEEDED.  "You have to come back!"  "You have to come to Guadalajara!"  "You have to bring your show to Spain!"

A few photos of the after-show gang: 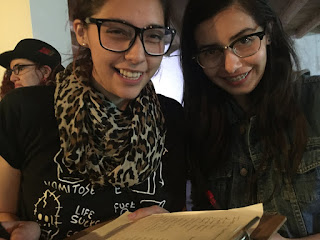 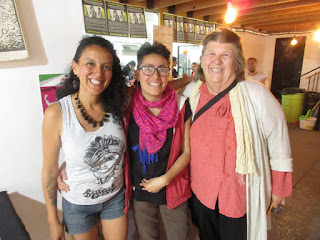 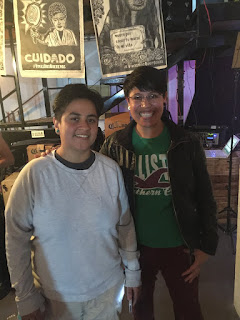 This audience confirmed for us that we were doing something important by bringing our theater to Mexico.  For both of us, what started out as an adventure turned into something else on that night.  We know we're going back -- after we learn some more Spanish and translate more of our show!  We have since heard from Minerva that some recent incidents of violence and harassment of women have inspired the feminists to organize demonstrations across the country on April 24!  Wish we could be there in solidarity.