Rosalia and I went to Essaouira, three hours up the coast from Agadir, to stay for several days, by grand taxi.  The little taxis are confined to their particular cities.  The grand taxis can take you anywhere.  Rosalia went to great effort to arrange through Mohammed, her friend and city taxi driver, for a "really nice" driver to take us to Esssaouira (three hours away), come back three days later to drive us to Marrakech (three more hours away), wait in Marrakech while we had lunch at the historic Mamounia Hotel (turned out to be three hours), and then drive Rosalia back to Agadir -- all for $240!

Achmed, the driver, stopped in a small banana-growing town to buy us bananas and bread, an action that won Rosalia's approval.  "You see?  That's real Moroccan hospitality.  They just love to have guests!"

Rosalia and I met in 1980 when I directed her in Shaw's MISALLIANCE for the Bear Republic Theater in Santa Cruz.  Our first night in Essaouira was Rosalia's 80th birthday.  Eighty!  Rosalia lives on her own in Agadir, where she first was assigned as a Peace Corps volunteer in 1988.  She's lived other places since, but now this is her 10th year in Agadir.  "When I was in the U.S., I thought about Morocco all the time.  When I'm in Morocco, I never think about the U.S."

Rosalia teaches drama to Moroccan young people several times a week.  Once or twice a year, they put on performances, which she directs and produces.  She's recently added a class in journal writing.  Her great passion is theater, and she ignites that passion in others.

She does all this despite her rheumatoid arthritis, which makes it difficult for her to walk or use her hands.  When I had all the students write scenes, she wrote one talking to her body.  This was the first time she had ever spoken of her feelings about her disability to her students.  It was a liberation for her.  She wants to write more about it, and all her friends encourage her to do it.

Rosalia is extremely friendly to everyone, except when she loses her temper, which causes her to apologize.  She has many close friends: ex-students, fellow teachers, doctors who treat her, her helper Fatima.  I met them and they are WONDERFUL.  She enjoys her work, her friends, the good weather, Moroccan food, the beauty and perks of living in Agadir, facials at a fancy hotel. She appears to be unstoppable.  She moves slow, but she's unstoppable.

Everyone has heroes.  Rosalia is one of mine.

Oh yeah.  Essaouira.  At dinner at the Riadd (a former traditional mansion turned into a guesthouse), I told them it was Rosalia's birthday, and only a few minutes later they came out with a beautiful chocolate cream cake...... 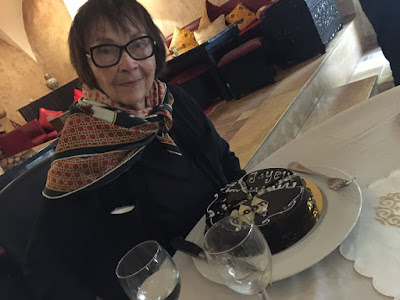 And it was frosted with her name! 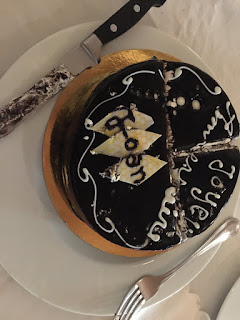 In all the restaurant birthdays I have celebrated, I have NEVER seen a cake frosted with the NAME of the birthday girl/boy.  And on a few minutes notice!
I was honored to witness my dear friend entering her eighth decade. 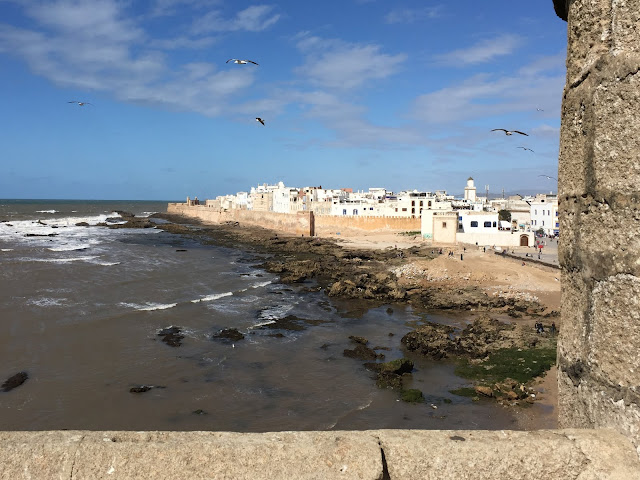 next to a small and vibrant port.... 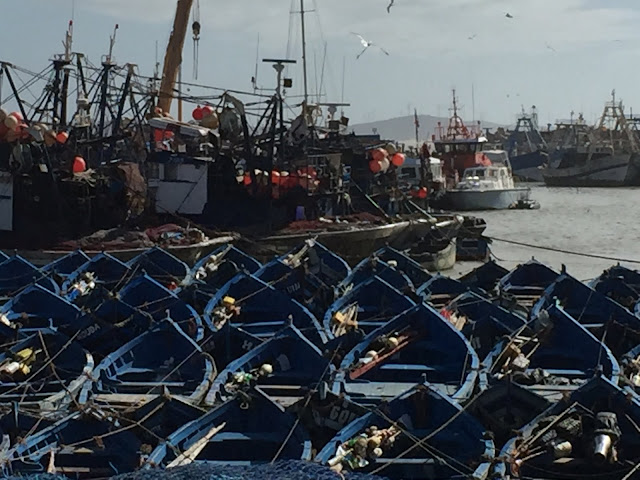 ..... famous for the sturdy blue fishing boats they still make there.... 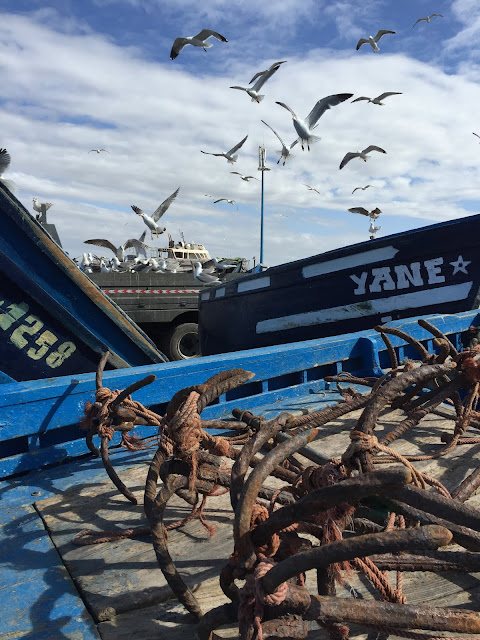 ..... and a crenellated fortress dating from the Portuguese occupation 100s of years ago.... 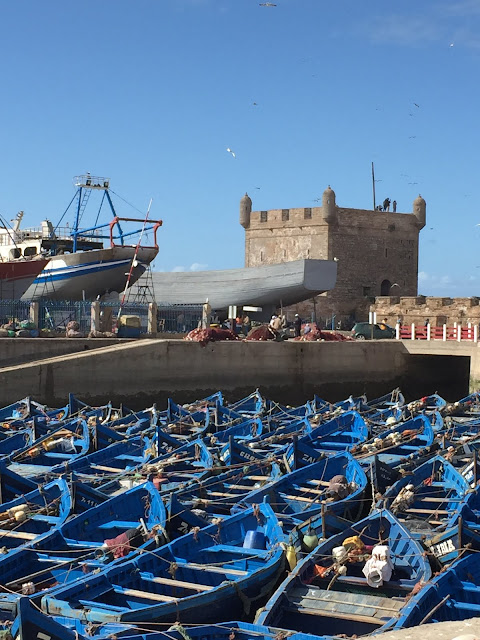 Orson Welles fell in love with the fortress and the cannons..... 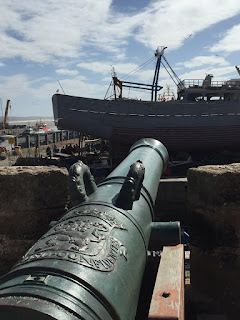 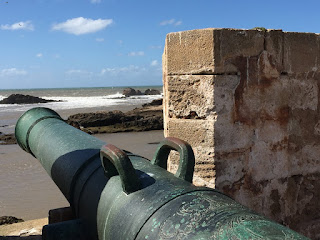 ....... and filmed the opening of his film of Shakespeare's OTHELLO here, which led the Essaouirans to honor him with a park and a statue.....
..... a photo of which I cannot seem to find.  But now I have to see the movie, which begins with Iago hanging in a cage in the air over the rocky coast or SOMETHING like that.

Our Riadd was in the Medina, filled with tiny winding streets and tiny shops and great big tourists, like myself.  Just around the corner from our riadd,  I spotted the Sweet Clock Hotel Literary Coffee. 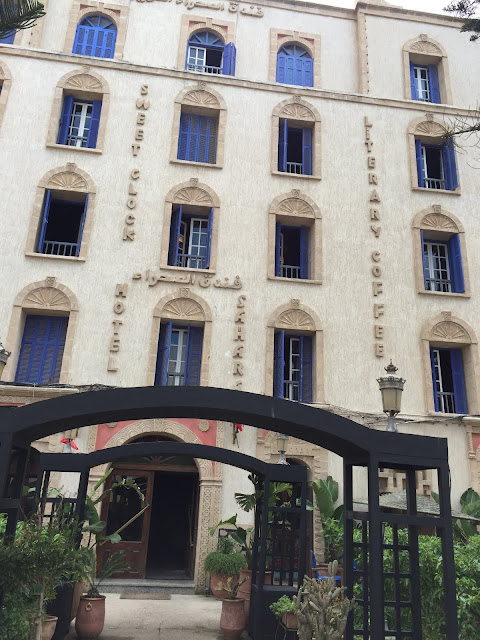 Sweet Clock Hotel Literary Coffee.  It sounded like a magical incantation to me. I entered in search of Literary Coffee.  There was no coffee to be had, literary or otherwise.  But the amber incense, the chirping of caged birds, and the seedy elegance swept me away.... 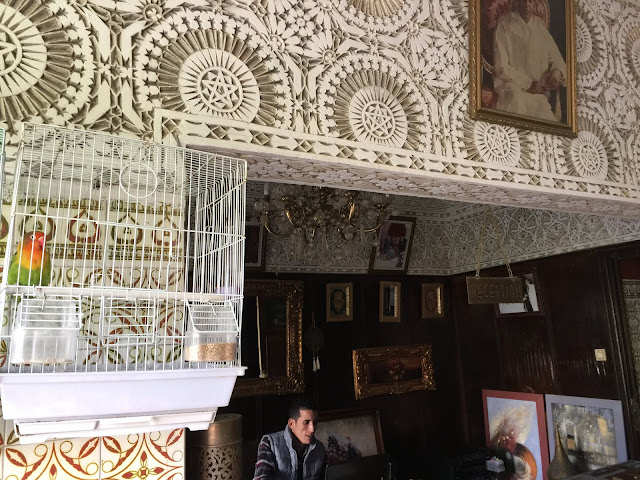 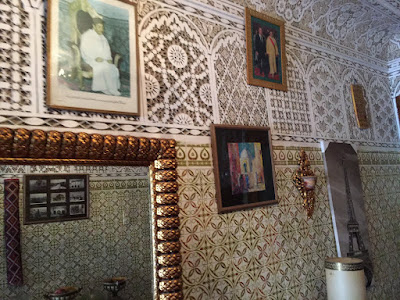 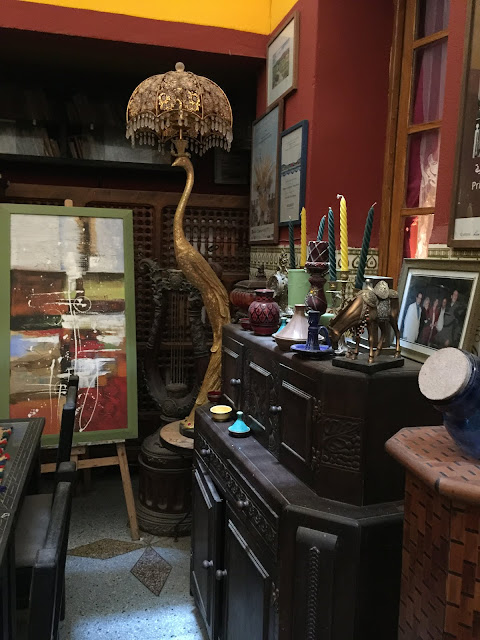 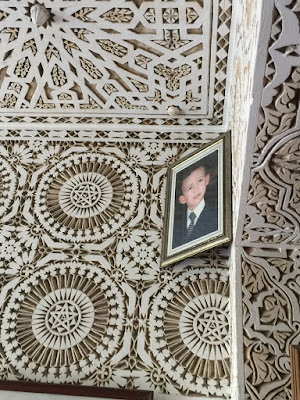 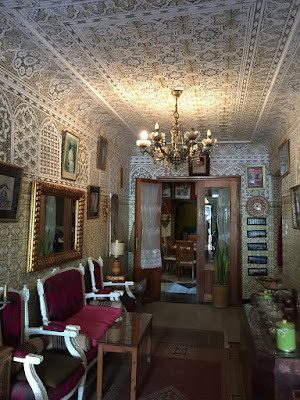 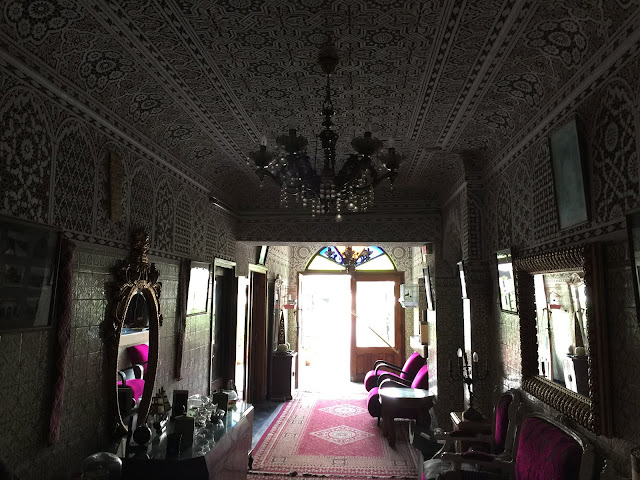 And then one of the residents of the Sweet Clock came wobbling through the lobby.  Very stoned and grimy, he looked.  And I realized that perhaps the desk clerk was right.  I inhaled my last breath of the sensual, disorienting fragrance of the lobby, and wandered back to my riadd.  On the way, I bought some amber incense, so that I can always transport myself back to Sweet Clock Literary Coffee, whenever I choose.