FIRST:  I want to thank everyone who responds to my blogs.  It really means quite a lot to me.  I get a very warm feeling of connection with you.  It makes a big difference, especially when I'm traveling alone.

SECOND:  I'm getting a feeling from people's responses that the lovely glow of my experiences here is convincing many of you to think of coming here.  But I confess I have neglected to mention the elephant in the room:  The status of women.

I haven't talked about how it feels to be in a country where so many women hide their faces.  It doesn't feel good!  So if you do come, expect to deal with your feelings about THAT.

When I was in Agadir with Rosalia, it was different.  I was meeting and teaching strong, creative, outspoken young women, some of whom wear the hijab (headscarf).  I was getting to know Rosalia's  close women friends, some who wear hijab.  These are two highly self-selected groups of Moroccan women.  Even in Essaouira, Rosalia and I met a young woman in jeans (no scarf) who was a rapper that we were hoping to see perform.

But now, in Marrakech, I only talk with men.   Sometimes I have a nice joking exchange with a man for a couple of minutes.  I have not dealt with a single woman shopkeeper.  Everywhere it's men, men, men, often telling me that they're selling goods made by a women's association in the bled (countryside).  They know people are interested in helping women and that makes their carpets cosmetics purses whatevers more attractive.  Maybe I should confront these men and ask why aren't WOMEN selling the goods if women made them?  Rosalia probably would!  (Yeah but part of me just wants to be on vacation.)

I don't feel disrespected by the men here, but I know that's because I'm an old woman. And everywhere everywhere everywhere I look I see women in the full burka, with only their eyes showing.  Some wear gloves too, and it was really warm today.  I hate it.  It's hard for me not to hate THEM.  I have a visceral response, and Rosalia does too.  She tells me all the time it wasn't like this when she came here in 1988, that the Moslem fundamentalism has become much more widespread.  She feels every time one of her students decides to remove her headscarf, it's a victory for that girl's personal liberation.  She mourned when her good friend decided to start wearing one.

As for me, the headscarf doesn't bother me visually.  For some reason, they all look like fairy princesses to me.  The politics of it are very abstract to me.

But the burka....  Not every one is a big black enveloping cloud.  They come in all styles and fabrics.  Yesterday I saw a group of people I'm sure were tourists from another Moslem country.  The women were dressed in modern pants and blouses.  Very summery clothes.  And they all had hats and full veils in matching prints.  One of them had a hat and veil with big red polka dots on white fabric.  The bizarre irony of concealing your identity with red polka dots... It got to me.  I wanted to scream at that woman, "What is WRONG with you?"  Maybe it's because I like polka dots so much.

Today I saw a woman in full burka walking holding hands with her very butch little girl who was wearing a baseball cap, t-shirt, pants, and cowboy boots.  Oh, do I wonder what that girl is going to do -- or be forced to do -- when she grows up.

To see all these wonderful lively beautiful girls with their masked mothers...

I know that many women feel they have no choice but to do it.  I know that some women DO choose to wear the full veil, as they're choosing to wear the hijab.  And I feel my own freedom personally threatened by every single veiled woman I see. 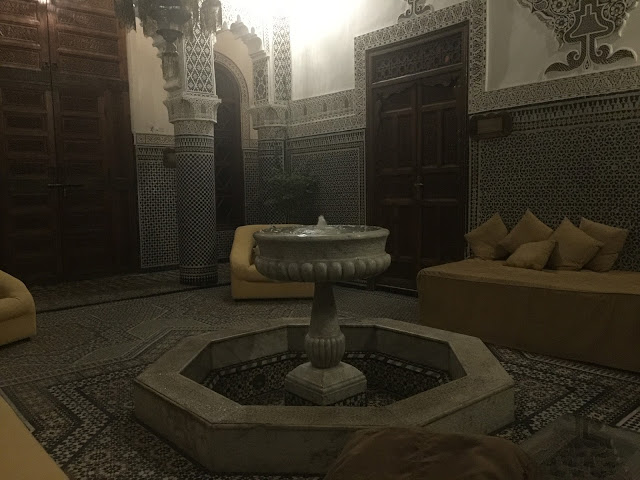 This is one of the many pavilions in my riadd.  How many?  Five?  This is the most isolated one.  I came here because there's a lot of noise in the central patio, where the restaurant is.  The only noise here is the splashing of the fountain. Blissful.  And in between pavilions, there  are little nooks everywhere.  Here's a couple of nooks. 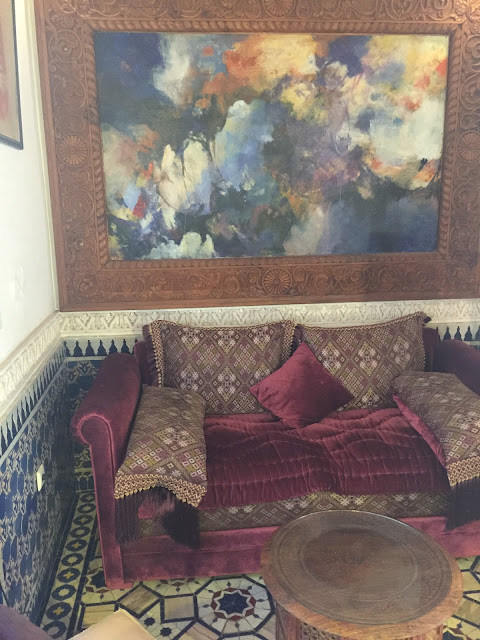 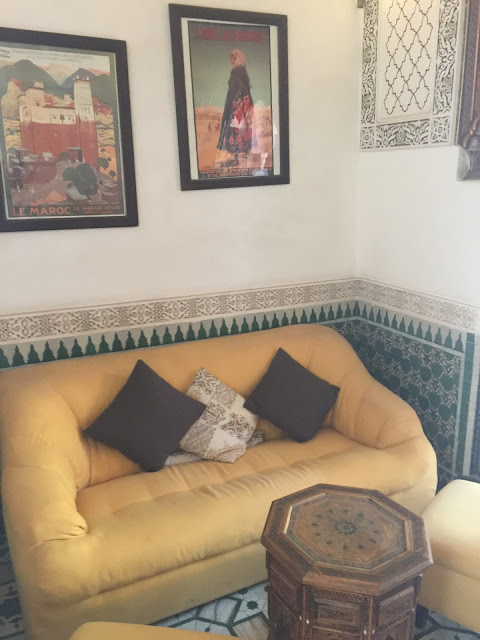 Oh yeah, and let's not forget the terraces.  Here's the terrace where I sat and wrote my last blog: 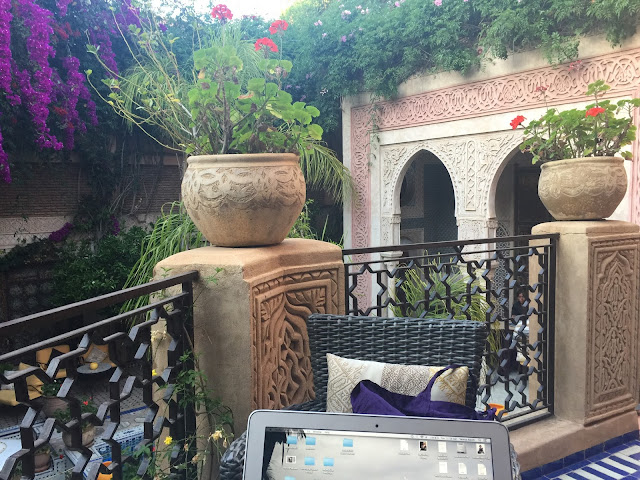 One could say that Riadd Sebban is a complete world unto itself.  A graceful, comfortable, elaborately decorated world.  As well it HAD TO BE because the women of this very rich merchant family NEVER LEFT THE HOUSE.  Never.  Women lived in total seclusion.  According to Paul Bowles, who wrote in the 1950's, there was a saying:  A good Moroccan woman only leaves the house three times in her life:  When she's born (she leaves the house of her mother's body), when she marries (when she actually DOES get to leave the house and hopefully even has a good time but probably not) and --- of COURSE -- when she DIES!   Does that sound like a great way for a human being to live or WHAT??

Bowles has absolutely no critique of this saying, not being a feminist.  And then all the male writers about this culture complain that the women really ARE evil, that half of them try to poison their husbands, they're always yelling and irritable.  But why WOULDN'T you get just a bit irritable if you could never leave the house, even such a beautiful house as this?  Just thinking about it makes me want to poison my husband.  Fortunately I've never had one of those.

So here I am reveling in the beauty and luxury of my riadd, which was built as a prison for women.  Traveling in a Muslim Arabic country brings up a lot of troubling issues.

But dammit, I still want to have a good time and tell you all the cool things I'm seeing and doing!  So here's an argan tree (only found in Morocco) full of goats eating the argan berries. We actually saw this on the way to Marrakech. 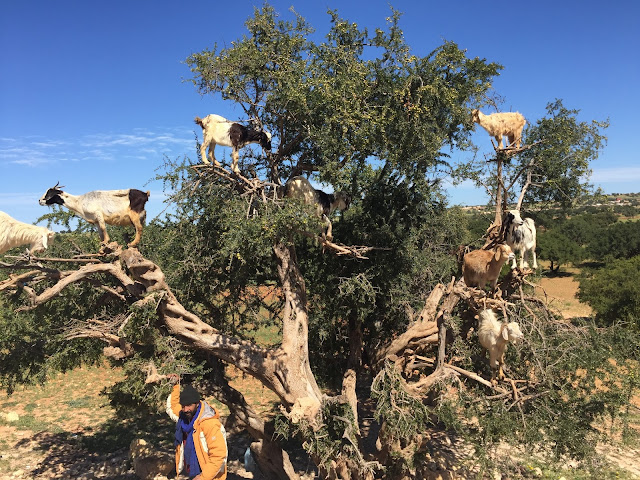 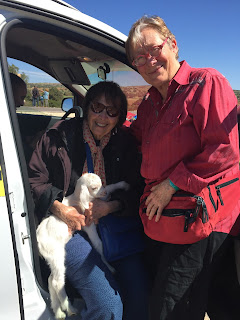 In case you haven't heard yet, argan oil (made from the berries found in the goats' dung after they've digested the tough covering) is the new wonder food AND wonder cosmetic!  Put it on salad, and it cures your diabetes!  Rub it in your skin and it banishes your wrinkles!  We've got goats and Morocco to thank for this great advance.    That's all, folks!