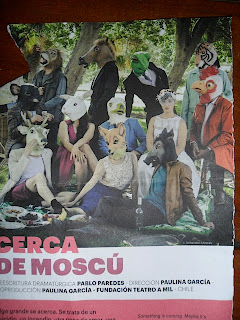 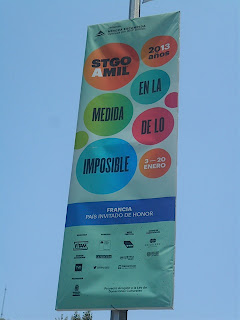 Below is a description of the play I saw tonight.  And, if that doesn't interest you, there are some photos of Santiago below it.

Tonight was the last night of the Santiago A Mil Theater Festival.  Before today, I had seen two plays from France and one play from Poland that were boring pretentious avant-garde blah blah, and two Chilean productions that were great.  So I decided there was no point in seeing anything BUT Chilean theater.

There were seven plays in the section "Chile -- Memoria 1973 -2013" --- the first date being the year of the coup.  So seven political plays --- all sold out!  On the one hand, I was very disappointed.  On the other hand, I was absolutely thrilled that the Chileans crave political theater about their own experience.  In my desperate effort to see only Chilean theater, I bought a ticket to something Chilean I didn't know anything about, for the matinee today.  The woman at the box office asked me several times, "Only one?  Only one?"  I didn't understand  why she gave a damn if I went to the theater alone.  Then I was surprised at how cheap the ticket was -- only $3!  Then, as I was ready to go to the theater, I noticed that it was for children 7 and under.  Of COURSE, the box office woman assumed I would be bringing a tiny fledgeling theater addict!  Anyhow, I did something else incredible instead.  But that's the next blog.

Tonight I saw "Cerca de Moscu," or "Close to Moscow."  This was a conflagration of characters from two different Chekhov plays having a wild drunken party that went on and on and ON -- ending with not one but two accidental shooting deaths.   Kind of "Who's afraid of the Seagull's Smile of a Summer night," if you know what I mean.

Sorry, no photos of the performance, since it was a regular indoor production.  Theater is just on an incredibly high level in Chile.  The acting, directing and set design mesmerized me for the whole time ---
Even though it was three hours long -- no intermission
Even though I couldn't understand most of the Spanish, and it was a very verbal play
Even though I could have left easily from my seat location -- several people did leave
Even though I knew the play might run later than the last subway (it did)
Even though I was very far away from my B&B
Even though I had no idea about bus routes
Even though I only had $2.75 in Chilean pesos and didn't know if I could convince a taxi driver to take dollars (I was able to, but he was a little leery, so I paid him $20, which was quite a bit)
Even though there were many more men than women characters, and the women were only concerned with love -- actually, this is the fatal flaw in the script, and would usually drive me out early but I just didn't want to THINK about it because they were all so brilliant at every single moment.

The production took place in the large center court and sweeping staircase of a rather crumbling but grand museum.  The audience sat on bleachers. Mostly young people -- 20's, 30's.   The characters were very playful, witty, graceful brilliant people just jabbering on about ... well, that I couldn't tell you.  It was very fast-moving, not realistic, not unrealistic.  Chekhov on acid maybe?  It began with Ivanov trying to kill himself by sticking his head in a bucket of water.  Platonov, a character from another Chekhov play, saves him.  For a long time, there didn't seem to be a plot.  Just dizzy complications.  There were about 12 characters, so lots of possibilities.  The staging was so physical.  All at once two characters would throw themselves on the ground, wrestling -- first playfully, and then more seriously.  It all happened so naturally.  Ivanov considers suicide again -- dancing around on the balcony railing -- 1 1/2 flights up!  That was literally terrifying.  If he lost his balance.... They would never let an actor do that in the U.S.

Platonov was one of those actors that you just love to watch.  Marlon Brando was one of those.  Platonov was so present at every moment.  And you felt that it was a Great Soul who was present.  So much subtlety in his face and gestures.  Could that guy listen!  So could the woman playing Anna, whose party it was.  I want to tell you that this is not the easiest thing for an actor to do -- to be as alive listening as when talking -- but without taking any focus from the actor who IS talking.  I have noticed on videos that it is not my strong point.

Anyhow, as long as it was light and frothy, I had no idea what was happening and was just enjoying getting lessons in acting, directing and set design.  At one point the stage becomes a garden or a forest, when six giant picture frames (as in 6 ft. wide and 4 ft. high) filled with naked tree branches are wheeled in.   Gee, I wish I had pictures.  I was reminded of a Shakespearean forest with all kinds of sneaking around and flirting and eavesdropping.  They were all wearing the animal masks you see in the photo of the program cover, above.

AFter that,  the romantic complications became serious.  It was lovely to see every single actor transition from witty repartee to real feeling.  These Chilean actors are deep!  All of them seem to be able to plunge down and open up and suddenly, someone who seemed foolish or pompous is in big trouble and breaking your heart.

Chekhov is famous for saying that if a gun appears onstage, it has to be shot.  In this play, TWO guns appear.  Both times, they are shot accidentally, in the struggle to keep the gun-wielding character from shooting.   And both times someone not involved in the struggle is killed.  The first time, it's a minor character who isn't even onstage.  He's offstage preparing the food, and staggers on to die.  You feel terrible.  It's a real death  But he IS a minor character.  The second time, it's Platonov.  What an advertisement for gun control. 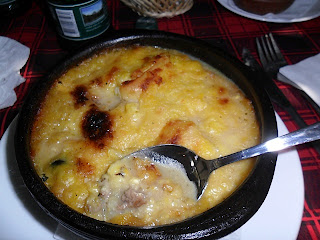 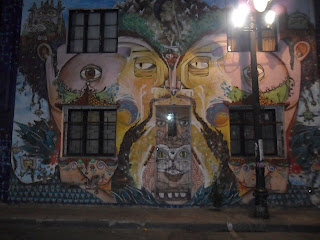 One of the many wonderful murals in Bella Vista, a kind of funky Greenwich Village.  Taken at night. Next are several photos of the Castillo Hidalgo, in a park in the middle of the city, with views from the very top of the hill. 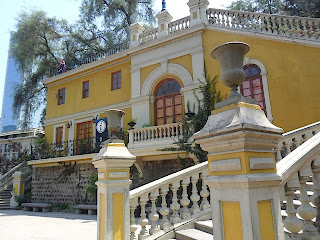 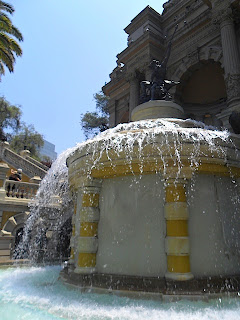 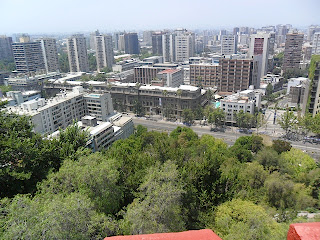 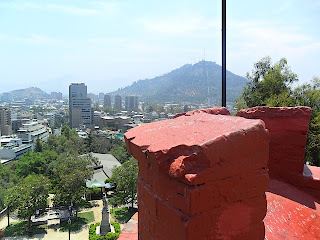 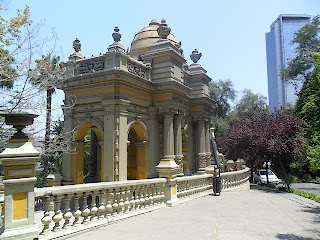 I might have seen this next image almost anywhere in the world.  But where I saw it was in Santiago. 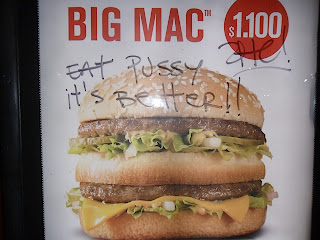