Museum of Memory and Human Rights

I went to the the Museum of Memory and Human Rights, which opened in 2010.  There's a very large plaque near the entrance with a quote from the speech that President Michele Bachelet gave at the opening ceremony:

"We cannot change our history.  We can only learn from it.  That is our responsibility and our destiny."

This museum is a valiant effort by the Chilean people to learn from what happened in Chile between 1973 and 1990.  I got the English audio guide and spent six hours going through exhibits, trying to understand the enormity of the tragedy that began on September 11, 1973, with a violent military coup -- and continuing on until the country finally returned to democracy in 1990.

In 1970, Salvador Allende was elected president of Chile.  He was the first Marxist to become a democratically elected head of state. 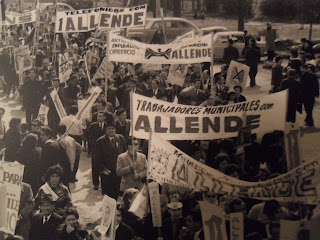 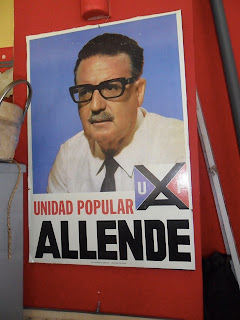 I was one of the hundreds of thousands of people all over the world who rejoiced at the possibility of a democracy that would act in a dramatic way to lift its citizens out of poverty.  Allende intended to wrest control of the Chilean economy from the US-backed oligarchy that controlled it.   But in response to Allende's election, Nixon vowed, "We're going to make their economy scream."  After all, Chile has the biggest copper mines in the world.  How dare they think that they're entitled to control their own industry?!?

With Allende's victory, there was an incredible blossoming of culture, including theater.  In 1973,  I was in graduate school, planning to go to Chile to write a dissertation on the amazing grassroots theater movement going on there.

And then the Chilean army, led by General Pinochet, bombed La Moneda, the Presidential Palace equivalent to our White House, and the long dictatorship began.  We know now that the CIA was actively and secretly supporting the coup planners.  One CIA operative wrote that the decision of who was going to run Chile was too important to leave to the Chilean people.  So my own government was complicit in the crime of the destruction of Chile's democracy.  I felt a strong desire to know in more detail what had happened.

No photos were allowed in the museum, which was good.  There was so much information, so much emotion.  The distancing device of a camera would not have been helpful.  These photos are from postcards I bought, along with a few photos I took at a cafe that had posters.

The museum is enormous, powerful, overwhelming, devastating, moving, uplifting.  It begins with a map of Chile, with dots showing the hundreds of places where acts of repression, torture, and murder took place.  Then we see photos of 83 of the 190 memorials to the victims of the dictatorship, created by private individuals and groups, all over the country -- ranging from humble corners of rural cemeteries to massive sculptures.   I just started crying, as the completeness and destructiveness of the junta's actions began to sink in for me.

I'm having a hard time writing about this.  How to express the enormity of a transition from democracy to brutal dictatorship in one day? A nightmare that continued for 17 years?   How can I describe something I cannot comprehend myself? 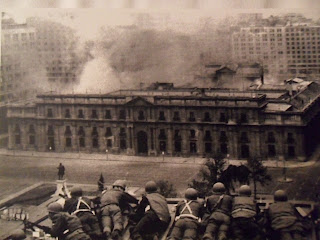 I went upstairs to a section that recreates what happened on September 11, 1973, a day that dawned with La Moneda already surrounded by soldiers, with tanks in Constitution Square.  Then the planes started bombing.

There was a documentary that focused on interviews with eyewitnesses who were with Allende on that day.  One aide urged Allende to call the citizens to come to the Square in protest, but the President could not bear the thought of the slaughter that would ensue.   Another urged him to escape.  But that, too, seemed wrong to Allende.

Incredibly, even though the Palace was being bombed, the phones still worked.   Allende phoned the one radio station that wasn't already occupied by the army and gave his last speech.  Crouched under a desk while the building shook from bombs, Allende spoke with courage, calmness and a vision of a bright future to the Chilean people. It's ubelievable that he could do that under the circumstances. You can read and hear a recording of his speech here.   It seemed from what eyewitnesses said that he shot himself very soon after.  One of the most eloquent symbols of the coup are Allende's eyeglasses, which were found in the wreckage of the bombed Presidential Palace.
Allende's shoes were also found, apparently blown off his body by the force of a blast.
According to the Truth Commission which investigated after the restoration of democracy, during September 1973 alone, there were 598 dead, 274 disappeared detainees and 19,083 political prisoners taken and tortured.

While the arrests, torture and assassinations continued, there was always resistance -- and strong international support for that resistance.  Below is one of the anti-Pinochet murals that appeared all over the city. 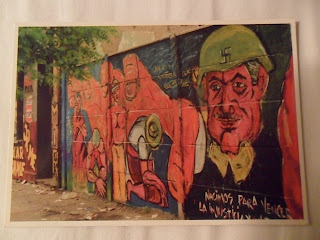 In the prisons, people who were kept in darkness could sometimes see a bit of light through drains that were in the shape of seahorses.  (It seems that decorative drains are common in Chile.)  So the seahorse became a symbol of resistance behind prison walls. 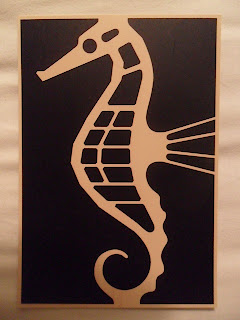 Pinochet just kept repressing, and people kept resisting.  In May 1983, there were enormous protests against massive unemployment and economic suffering.  (Funny, since Pinochet's main justification for taking power was to prevent economic chaos.)  Despite censorship, the press raised its voice -- first in clandestine bulletins and then in regular magazines and newspapers.  Opposition parties organized.  Their leaders are persecuted and sometimes assassinated.  New leaders come forward.  The opposition demanded free elections, with parties running candidates for president.  The junta refused, but finally agreed to a referendum, giving Chileans the chance to vote up or down on the current dictatorship.

That's very strange, isn't it?  But the junta was always seeking to legitimize itself, not only in the eyes of the Chilean people but in the eyes of the world.  They had organized a similar referendum much earlier, and they had won it decisively.  There might have been massive electoral fraud involved in that first referendum, but no one was overseeing the election other than the junta.

This time, tens of thousands of people in the opposition were trained as poll observers to prevent any hankypanky.  Both sides ran enormous television advertising campaigns.  The NO campaign, instead of focusing on the crimes of the past, looked to the future with the slogan "Joy is Coming!"  The YES campaign touted "Chile:  A Country that Wins!"  There was an exhibit that was a collage of campaign television ads from both sides.  Some of the NO ads had substance, but a lot of it seemed like a war of Coke against Pepsi.  Nevertheless...

On December 14, 1989, the first presidential and parliamentary elections after more than 16 years took place.  Patricio Aylwin, representing the Parties for Democracy, won.  And on March 11, 1990, he took office as the first democratically elected President of Chile after 17 years of dictatorship.

I'm grateful to the Chilean people, for creating the Museum of Memory and Human Rights, so that all who care can study and try to understand the trauma this country endured.  I bought the mug below, so that when I drink my tea, I will be reminded of the suffering and courage and persistence of the Chilean people. 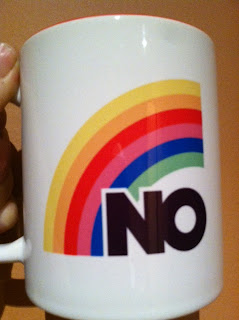