Dear Friends:  Well, this is my first blog.  I was inspired to do this by my niece Rose, who blogged up a storm when she was studying in Cyprus for six months.  I enjoyed her blog so much!  And now I'm visiting Rose in Santiago, Chile, where she's studying Spanish.  The girl does get around.  I would show you a photo of the two of us, but I'm typing this AFTER I typed everything below, and I cannot seem to add any more photos.  Damn.

I just happened to arrive in Santiago at the tail end of a gigantic experimental/political theater festival!  I want to tell you about the street theater I saw today.  There's a lot of street theater in this festival.  But this is the only one that was just one performance.  This was presented by La Patriotico Interesante (The Interesting Patriot??) and was titled "La Victoria de Victor."  Victor Jara was a great and famous and very political folk singer who had the temerity to keep singing his songs after Pinochet became dictator.  Jara disappeared.  Of course, he was murdered, but there has never been any kind of closure in terms of bringing anyone to justice or even knowing what happened.  (I kind of made up that last sentence.  There are various graffiti aaround town demanding justice for Victor Jara, so I'm assuming no one knows what happened.)

Anyhow, The Victory of Victor took place on an out-of-the-way street.  I had to schlep to get there.  It was very moving to be part of this Chilean crowd reliving part of their history.  I think it must be very difficult to somehow digest and integrate what happened.  OF course, the U.S. facilitated all the evil it possibly could.  Shit, I'd like to live in a country that doesn't do so much evil!  Well, let me just tell you about the play and show some photos. 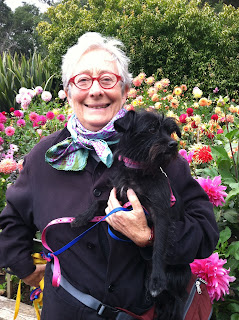 Well, this is not a Chilean actor.  This is me and Ruki, during the short time we tried to make it together, which coincided with when the dahlias were in bloom.  Ruki has become Uhura and is blissfully happy living with Calla and LauRose and their gang of pups.  ANYHOW, I just cannot seem to get the damn photo I want to upload, so I tried this and it worked.  One more time. 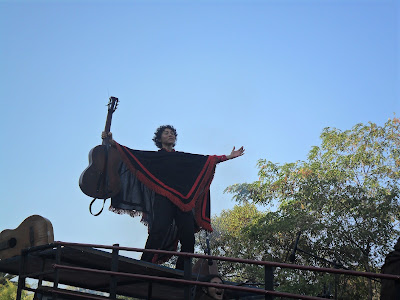 This is the actress playing Victor Jara.  He has just come to life from a huddled mass.  He's standing on top of a truck with a rock band playing.  Basically, it was a street theater and a rock concert combined.  She really does look like Victor Jara, who was very beautiful with black curly hair.  he always wore indigenous sarapes. 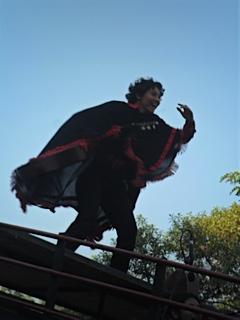 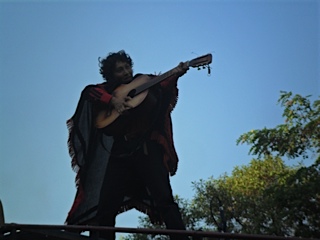 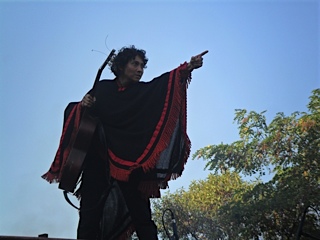 He's just on fire, the band is playing and he's inspiring/leading people with his gestures -- including using the guitar like a gun. 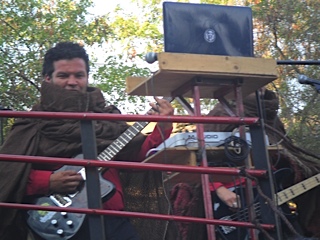 Here's a band member on the truck.  They were all in red, like Victor, and also wearing these Andean kinda rough capes that he used to wear.  The whole production was very rough.  Everything was torn and used and ROUGH. 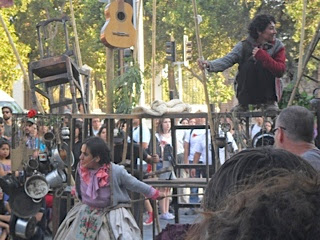 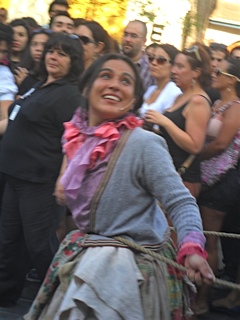 She loves him.  Let's face it, he's pretty great for a man. 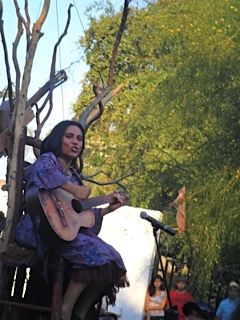 The wife didn't do too well.  They covered her with a blanket.  So this is the next woman.  Very soulful.  She pooped out too, but there was something special about her while she lived.   (I'm sorry, it's hard to keep everyone straight when you don't really know the history.)


So how was this  "THE VICTORY OF VICTOR"?  Look, they told the man's story and sang the man's songs.  Sometimes that's the only victory you get.  He is still a force in Chilean political and cultural life.  I'm not saying it's enough, but it's something.  Theater isn't enough.  But it is something.  I was really thrilled to witness this performance and the reactions of the crowd.
Posted by Terry Joan Baum at 7:55 PM