Just Another World Premiere in a Dyke Bar in Cape Town


Today, Eric and I were wandering around Stellenbosch, a small deluxe wine country town which is highly reminiscent of the Northern California wine region, except the mountains are far more dramatic.  I really didn't want to be there -- I mean, did I schlep all this way to feel like I'm in Napa Valley? -- until we stumbled upon a small circus. 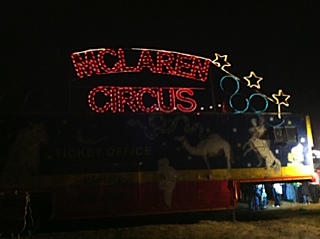 We got to the circus late, and the woman at the box office said it was sold out.  So we went to peek into the tent through a slit.  But a young man immediately came out to stand in front of the slit and tell us we had to buy tickets.  We explained that we couldn't buy tickets because the box office said it was sold out.  He explained that there was a possibility that HE could supply us with tickets.  The sum we offered for two tickets was acceptable, so we ended up getting in for half price.

I'm a circus nut, especially small circuses.  I know, I know, the animals and all.  I can't help it.  I love circuses.  Actually, it was hard to feel that these animals had been beaten into submission (a goat, 2 camels, 3 horses, 3 dogs), because they did hardly anything at ALL!  And the circus just flat out LIED about there being lions and tigers, because there WEREN'T ANY.  But the ACROBATS and JUGGLERS and EVERYTHING ELSE (except the clowns) were wonderful.  I think maybe they lied about the lions and tigers to get an audience.  And then the show is so great, nobody minds. 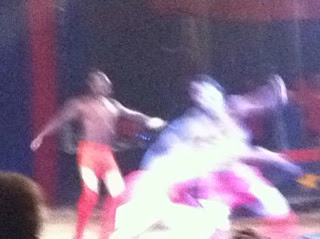 I think the circus might have been a very South African experience.

We were walking home from the circus, and I said to Eric, "Wow!  We've only been in South Africa four days and we've seen three live performances!"

It's been a busy week.

The night before my show, I was so excited, I couldn't sleep.  This was the very first time I was doing LESBO SOLO!  And without rehearsal or direction or anything!  A little bit like performing without a net, which some of the circus people did.  I mean that circus was almost as nerve-wracking as Eric or me driving on a curvy, steep  left-hand road!

But back to MY performance.  It took place at Beaulah's, the lesbian bar in Cape Town.  A very nice place.

It was too dark for photos.  I did try to get a photo of the beautiful pink neon sign out front after I left the bar, but I almost got killed crossing the street to get it because I looked the wrong way for traffic, so I decided to forget it.

I did the beginning of ONE FOOL, where I fall in love with people in the audience, a section of IMMEDIATE FAMILY that focused on Virginia's…. wait a minute!  This blog is too long!  People are already saying it's too long!  At least a couple of people.

Anyhow, I did three scenes, including the 2 above and "Crashing the Castro," about running for Mayor of San Francisco, and I talked in between about the plays and my experiences.  I told the story about dropping acid at the first women's music festival in 1974, wanting to kill the motorcycle club guys who tried to break in to the festival, and then realizing that I was destined to start a women's theater to do a play about women's rage against men, which I've still never done.  People liked that story.  It's got legs.

There were 65 people there, which everyone considered a huge crowd.  Capetonians are supposed to be very apathetic.  The bar was really packed.  It seemed it was a crowd of regulars and people who had come especially for LESBO SOLO.  Only one black woman.  I got such a great turn-out because of Tracey Saunders, an amazing lesbian theater-lover and activist who interviewed me by phone before I got here, so I had a story in the Capetown Times -- read here!  She also did a lot of social networking stuff.  My first email from Tracey said that she would burst a blood vessel from excitement if she didn't find out right away when and where I was performing.  I find that a very attractive quality in a woman.  Me and Tracey: 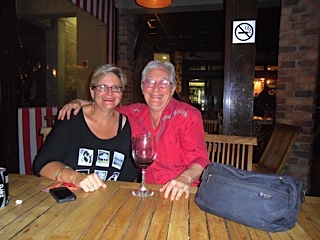 Here's me onstage before the audience arrived: 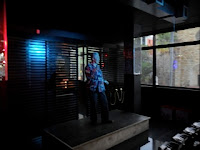 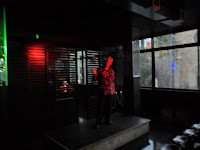 As you can see, I was red then blue then green then gold.  I thought they'd said they were going to change the lighting for me, but this was it.  It must have been very distracting for the audience.  They were SO attentive.  Wonderful to be in such a distracting environment -- there were folks at the bar talking in the background softly, the lights were changing -- and feel that the audience is so WITH you!  I would say I was good, not great, because I'm just starting to figure out what LESBO SOLO is about.  People were very appreciative, but unfortunately, I couldn't stay at Beaulah's long to talk to them, because the music was too damn loud.

So I went out with Eric, Tracey, her partner (shit!) Karen, and two other amazing activists whose names I didn't write down.  We sat and had pizza and wine in a lovely outdoor cafe and had an incredible conversation about South Africa's overwhelming problems.  These women were so knowledgeable, experienced, powerful --- and frustrated. 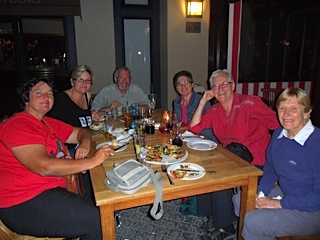 Yesterday, Tracey took Eric and me to breakfast and a driving tour of Cape Town.  Here's us on Table Mountain. 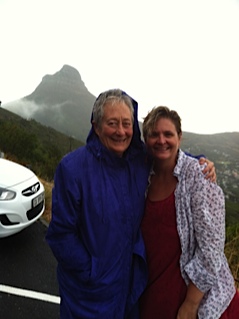 I have soo much more to say, but I'm going to get this out right now.  Below are a couple more photos -- not of Tracey.