Haven't had internet access for a few days.  Today is a bit shaky.  Hope I can complete this day's blog.  I'm in Pietermaritzburg, but want to talk about going to Robben Island, where Mandela was imprisoned for so long.  It's just off the coast of Cape Town.  A half-hour boat ride.

You have to get tickets in advance.  It's always sold out.  So we went over on a boat with 300 others.   First you go around on a bus with a guide.  Then you have a walking tour with another guide.  It's totally organized, with no free time to wander, because they have so many visitors.

The island is a fairly parched flat desolate place.  Before it was a prison, it was where lepers were sent.  They lived segregated by gender and race:  Women of color, white women, men of color, white men.  Each group had a church -- but not much else, like medical treatment.

It's an especially desolate place.  The prisoners were given no gear to protect themselves from the limestone dust, and all of them suffered permanent damage from it.  It even damaged their tear ducts, so they can't cry.

BUT but but but.... There is a cave in there.  It's where the prisoners ate their lunch, to get out of the burning sun.  The back of the cave was their toilet, because they weren't allowed to use anywhere else.  Because of the smell, the guards never came in --- so the prisoners could talk freely!  Our tour guide told us that those limestone cave conversations are now referred to as the first democratic parliament in South Africa.  And, in fact, some of the ideas they developed in the stink of that claustrophobic cave were realized in the first democratic constitution of the country!

From this I learned:

1.  No matter how bad you imagine oppression to be -- it's worse.
2.  No matter how resilient you imagine resistance to oppression to be -- it's more amazing.
3.  It's a very bad idea to put all the political prisoners in the same place.  How did they come to be political prisoners?  They have shown tremendous vision and tenacity and energy.  They WILL continue to do their work, if they possibly can.

I'm reading LONG WALK TO FREEDOM, Mandela's biography.  Haven't gotten to the part on Robben Island yet.  So far, the ANC hasn't been outlawed.  I HIGHLY recommend it to anyone interested in political change.  He is so incredibly honest about all the mistakes he and the ANC made.  Also, although I always understood that the struggle to end apartheid was very long and complex, I am still amazed to read the details of it.  The political sophistication, the persistence.  Anyhow, it's exciting to be reading about his life and seeing where he lived it, like Robben Island.

I'm running out of battery, and I want to get this sent.  Next, we went on a walking tour of the actual prison buildings.  This time, our guide was a former political prisoner on Robben Island.  All the walking tour guides are.Vusumzi was imprisoned when he was a student activist.   It was so moving to be in his presence.


Sorry, didn't turn this photo around.  This is a blog on the fly, with iffy internet and waning battery power.

I stood in the prison yard above.  It is so important to go to the places where events actually took place.  As Eric said, our visit here is a pilgrimage.  There is something about being in the actual place that helps me understand deeply, yes, these things actually happened.  Human beings did these things -- both horrible and wonderful.  Certainly, being in the presence of a former political prisoner was another layer of helping me open myself to the reality of the incredible struggle and political events in South Africa.

It is difficult to express in a photo how tiny this cell is -- and yet how homey it was with Mandela's shelf of books (not in photo).

Of course, coming to South Africa, I knew I would visit Robben Island.  But I didn't know I would visit the Jewish Museum in Cape Town and find within it a replica of an Eastern European shtetel (spelling?), a little Jewish village.  Three of my grandparents grew up in a place like this.  I've seen pictures, but it was really something to sit in front of an actual building.   It was some kind of return to my roots. 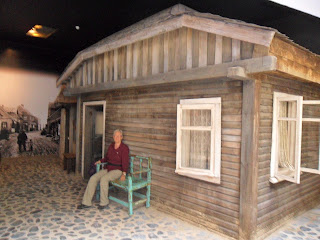