First actual day in South Africa.  Why South Africa, you might well ask?  Actually, it was a total whim.  My friend Eric Gordon, from LA, and I had talked about traveling together. 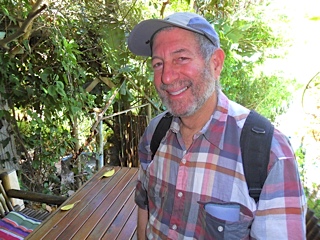 He told me that the gay synagogue in Los Angeles, was having an online auction to benefit themselves.  Apparently someone had donated 2 round-trip tix to South Africa.  He asked if I was interested in bidding on them.  I said, "Why not?" which is of course a very good reason to do something.  So we ended up getting 2 plane tickets for $1300, which is a very good deal.  So THEN we had to go to South Africa!  So that's how we got here.

Cape Town surroundings are astonishingly beautiful.  Here is the view looking one direction: 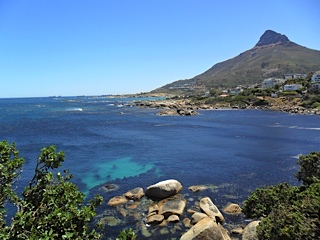 And here's the view when I turned around: 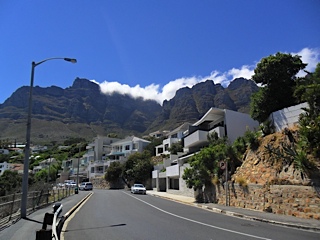 That's Table Mountain, with the heavy mist that often clings to it, which is called the Tablecloth.  That meant there was no point in taking the tram for the view from the top, unless a view of 3 inches was what we were after.

Today we rented a car, which was an absolutely terrifying experience.  We're driving on the left side of the road, with the driver sitting on the right --- and it's a stick shift!  We're home now, but I'm really shocked that we made it through the day without a scratch.  Eric kept on drifting to the left because of course it just felt so weird to be driving from the right side.  But somebody behind us kept honking, and when he pulled up to yell at us, we saw what he was carrying: 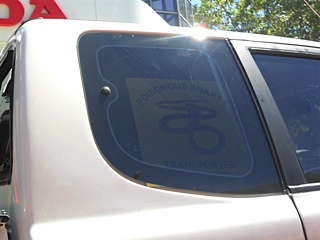 Can you read that?  It says "Poisonous snakes transported."  Wow, you really don't want to piss off this guy.  Eric explained we were left-side virgins, and he was very forgiving.  In fact, everyone is incredibly nice and friendly.  There's a great energy about this place.  We went down to the harbor.  There was a really good steel band playing. 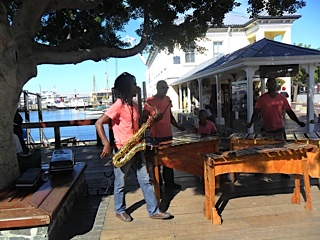 Saw an amazing "only in Africa" chess set: 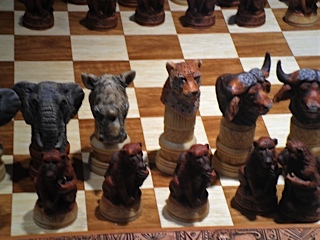 The real treat was at night when we went to a restaurant/bar/theater to hear a young lesbian performer sing.  Her show was titled "Faith, Why You Always Running?"  She was 20, butch, had a great presence, very deadpan, relaxed, funny.  Her songs were totally cynical, disaffected.  In other words, Faith didn't seem to have any faith.  Some excellent lyrics.  Good rhythm guitar.  Not a lot of melody.  Her first song was titled "Reciprocate."  Here's my favorite lyric:

"I've got better things to do with my life than pretend to reciprocate."  This girl is harsh!

My favorite song was her softest song:  "I'm sorry -- again." 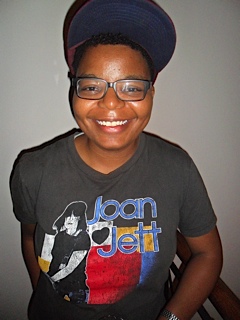 She's coming to my performance tomorrow.  I'm pretty excited about this show, since I've never done it before!  So much for South Africa Day One.
Posted by Terry Joan Baum at 3:20 PM