THE DAY HAS ARRIVED!  DO THAT VOTING THANG!

PLEASE FORWARD THIS TO OTHERS IF YOU WISH.
READ ALL MY BLOGS AT WWW.TERRYBAUM.BLOGSPOT.COM .


Just got back from two days of walking around Carson City, Nevada, knocking on doors -- and I MEAN knocking because more often than not there was no doorbell -- talking to anyone who answered, about the election. 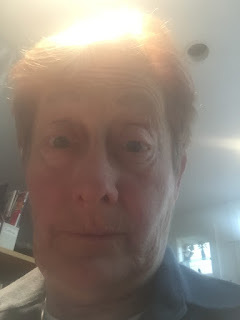 Originally I planned to stay through the election.  But then I discovered that two days of tramping the suburbs of Carson City was enough.  After all, I'm almost 70!  I'm entitled to be tired!  I'm old!  Is this selfie not proof?  (I'm popping my eyes to make them as big as possible because they seem to have shrunk over the years.)

But now I think it was a big mistake coming back early.  I should have stuck with my original plan and stayed through the election.  What if we DO win Nevada?  How cool would that have been, to be there, at that moment?  Oh well.  Shoulda coulda woulda.  Such is life.

The Carson City adventure began on Friday afternoon. I took BART to North Berkeley, where I met John Skonberg, who was driving to Reno.  Nan Weiner was also there for the ride.  The three of us had never met before.  We were being organized and sponsored by the Sierra Club's political arm, which was partially subsidizing our hotel rooms in Reno.  John was also getting 25 cents per mile.

John lives in Berkeley and works as a lawyer in a downtown SF firm.  Nan lives in SF and works a free-lance editor.  She had already canvassed in Reno.  John and I were newbies.  After checking in at the Silver Legacy Hotel, Resort, Casino, Spa and whatever, we went to meet a bunch of Nan's friends, also in Reno for canvassing, for dinner.  First we went to the wrong restaurant and then  we had to drive absurdly far, considering we'd just driven four hours.  John and I got very grumpy.  I told Nan that her friends had better be very charming or I would never forgive her.  I think that made her a little nervous.  I was just joking.  Sort of.

Anyhow, it all turned out wonderfully.  I met lots of very charming people from San Francisco who asked to be put on my mailing list! Now, THAT'S what I call a good time!

Then back to our very nice hotel rooms.  From the 27th floor, I had a lovely view of the Circus Circus clown tower!  What's not to like? 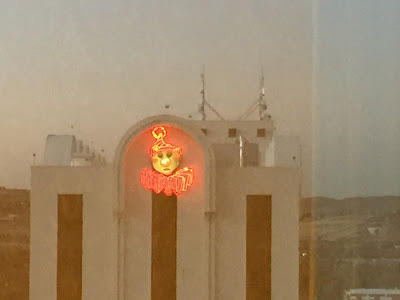 I walked through the underground casino before going to bed. 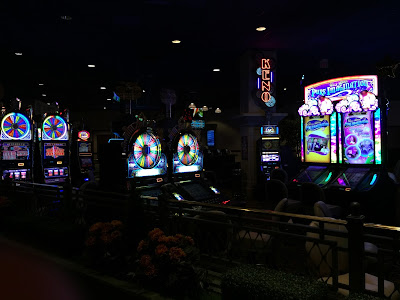 Next morning, 9 am, we were at the office of FOR NEVADA'S FUTURE. This was a group of very smart, passionate progressive people who have been working long at organizing for the election.  Almost all the organizers were young and all the volunteers were old.

I loved the organizers' hand-drawn charts of how how close they got to their weekly goals of convincing people to vote for Hillary and Catherine Cortez Masto, who is running for the Senate. 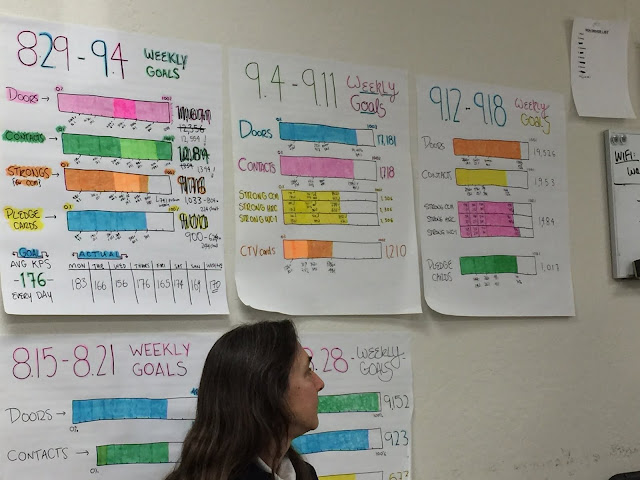 They were SO ORGANIZED!  They had water bottles, they had breakfast burritos (delicious), they had all the canvassing precincts divided into groups so that everyone in the same car could go to the same area.  They trained us, they inspired us.
Then we all got into our respective cars to go to Carson City, the state capitol, 32 miles from Reno, population 54,080 (ain't GoogleSearch wonderful?).

The landscape on the way was quintessential Wild West desert and and snow-capped mountains. 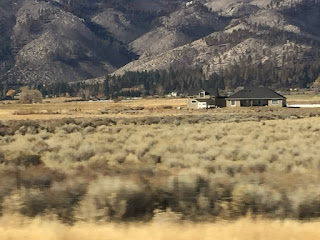 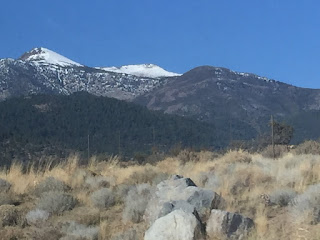 John dropped Nan and I off with our little maps and lists, and he went to his own precinct.  And we three walked and knocked and knocked and walked.  Mostly, folks didn't answer.  A beautiful weekend, and they were out.  We were in working class and poor suburbs, with wide streets.  The trees blazed yellow with Fall colors.  And always, the beautiful mountains in the distance. 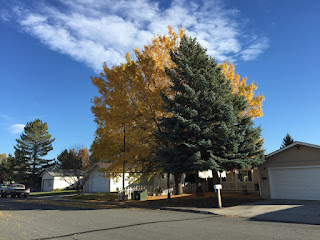 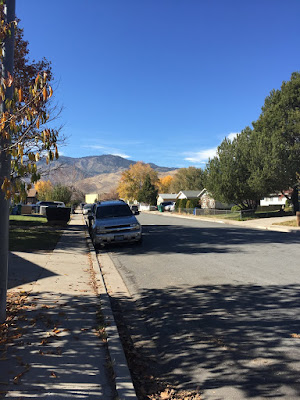 For two days, we walk-knocked from 11am-2pm, came together for lunch and check-in, and walk-knocked some more from 3pm-5:30pm.   The land was flat, but there were a lot of two or three-story apartment buildings.  At this late date, our voters had been pre-selected to be probable Clinton/Cortez Masto supporters.

I recorded everything on my smartphone with the Minivan app.  This is my app map at the end of Sunday: 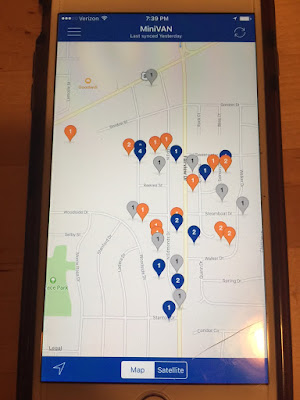 All the little balloons were white when I began.  Each balloon represents a different address, with the number of potential supporters there.  I would click on the balloon, and get the actual name and address.  After I walked, then knocked and hopefully talked, I filled in the response.  Blue: Supporter.  Orange: Not home.  Gray: Take off list (moved or refused to talk).

My most important job was to identify those supporters who had not already voted (lots of early voting in Nevada) so they could be urged to the polls on Election Day.

My second most important job was to discuss with supporters the logistics of how and when they would be voting.  One Hillary supporter hadn't considered that, since he worked 10:30-7:00 and the polls close at 7, he had to vote before he went to work.

And, third in importance was trying to move undecided voters toward Clinton/Cortez Masto.  That of course was the most rewarding.

I tried to discern what might be most important to a particular person.  With a woman whose living room was littered with toys, I talked about Hillary's support for paid parental leave after the birth of a child.  Guess how many countries, out of 185 surveyed by the International Labor Organization, DON'T have paid parental leave!  Guess!  I dare you!   THREE:  Lesotho, Papua New Guinea and...... Drum roll please.....THE UNITED STATES!  Cool shameful fact, huh?

I met one undecided young man for whom this must be the first Presidential election. He was very shy, but as we talked about climate change, he agreed that, yes, he had actually experienced the world getting warmer, that global warming was a reality -- a reality which Clinton AND Cortez Masto want to do something about.

One man yelled that he wasn't voting because BOTH candidates were so horrible.  ME:  "Is there perhaps one that you consider a little less awful?"
HIM:  "No!"  Then I talked about my concern that Trump might press the nuclear button.  I told him about an op-end column I'd read by an army veteran who had been in the position of actually launching a nuclear warhead when he was in the service.  The veteran wrote that he and other veterans worry that Trump might start a nuclear war.  My voter grudgingly agreed that Trump was more inclined to incinerate the planet than Clinton. In a rational world, that would move him to the polls to vote.  I know, I know.  That's not the world we're living in at the moment.

One young Latina woman was soo thrilled to be voting for the first time!  We discussed logistics of getting to the polls on Tuesday, and I gave her my big Hillary button.  She also wanted a house sign "Because that jerk across the street just put up a Trump sign!"  I let For Our Future know, and I'm sure she got her sign.

Yes,  using the App was confusing at first.  I was scared the first few times I knocked.  A few who answered the door were hostile.  Some scorned voting altogether, which made me really sad. Yes, it seems like an incredibly inefficient way to win an election. But the people who know these things say that it works.

When I DID have a real conversation, I often left feeling I could have done better.  But, imperfect as it was, the time spent talking to people face-to-face seems very precious to me.  Even if I didn't actually convince anyone to vote for Clinton and Cortez Masto, those conversations have to be a positive thing.  After all, we are mourning the loss of civility.  To have a civil conversation with someone who doesn't agree with me is no small achievement -- for both of us.

On Sunday night, we three exhausted canvassers returned home.  The next morning, I woke up, stepped into my backyard, looked up and saw this: 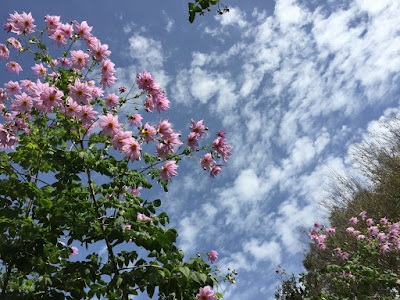 The world's a beautiful thing.  We have to start talking with people who don't agree with us, if we're going to save it.

This post was written with the help of Carolyn Myers.