WE CAN REVERSE THIS! 2

Okay, I admit, I sent out that very provocative blog post without much research.  But now I know more.

Look, Trump actually SAID on "60 Minutes" that the winner of the National Popular Vote should be President.  He doesn't WANT this job!  He just wanted the attention of the campaign!  He'll be THRILLED to not be President!  Let's help Trump get out of this spectacular jam he's in!

There is already an online petition to sign saying the exact same thing I'm saying on Change.org  (thank you, Lillian for the info).  There is absolutely nothing preventing electors from voting for the winner of the national popular vote, even if that candidate did not win the popular vote in their state.  This petition already has 4,000,000 signatures.  However, I could NOT figure out how to sign it, damn it.  The link to the petition is at the bottom of this post.  Please, when somebody figures out how to sign it, tell me.

BUT I BELIEVE WE NEED TO DO MORE THAN SIGN AN ONLINE PETITION.  I AM SUGGESTING.........

That's right, folks.  We've got to put our fingers and a 32 cent stamp where our mouths are.  Everyone loves to get postcards -- especially now when almost no one sends them (except me which is why I had this idea).

We need to send postcards to ALL the electors who are committed to Trump. Below is a list of the names of all the electors of the states who voted Republican.  Of course, if you're in a red state, you should concentrate on your own state.

As I said in the previous blog, some states do not demand that electors vote for the winner of the popular vote in that state.  But even in states where electors are "supposed" to vote the way their state voted,  if they vote otherwise, their vote will still be counted.  The elector would have to pay a small fine.  I'd be happy to foot the bill for one elector voting their conscience.  How about you?

For my list of electors below, I left out all the states that voted for Clinton.    If you want a list of all the electors, you can find it on Politico:
http://www.politico.com/story/2016/11/list-who-will-cast-a-formal-vote-for-president-2016-231235

So you can sit down right now and write a ....POSTCARD FOR DEMOCRACY!

We need to get the addresses of these people.  Can someone help me with this?  My friend, Richard Winger, who is my source for information on All Things Political, says they are available at state elections offices.  If for some reason, we cannot get the addresses, we will find another way of getting the postcards to them.  But it would be so cool to just put a 34 cent stamp on, and send it off.

I'd also like to have buttons made:  "I think democracy would be a very good idea! Electors:  Make Clinton President."  Hmmm... maybe too much info for a button.  Needs work. Yes?  No?

I'm also going to personally make up a card to give to folks.  Hey, does anyone want to help me with any of this?

You can get pre-printed postcards from the post office.  You can buy postcards anywhere.  How about a Collage Postcard Party!! (Thanks for the idea, Eve.)  I love the idea of people getting together to create/write postcards.  If you live near me, you can come over and choose some postcards from my VAST collection!

I'M HAVING A POSTCARDS FOR DEMOCRACY PARTY AT MY HOUSE, TOMORROW, WEDNESDAY, 7 PM.  I'LL SUPPLY POSTCARDS, STAMPS, AND PENS.  And I hope I'll have some addresses by then:

Let's spread this idea around.  It's a lot more fun to write a postcard than to click on a petition.  One friend responded to my last blog with, "Sorry, but it's hopeless."  Well, yeah, if you THINK it's hopeless, then it IS!  A LOT of hopelessly improbable things have happened -- including the jam we're in right now.  Certainly we need to try every hopelessly improbable idea to resolve this crisis.   BUT THIS IS NOT A HOPELESS QUEST!  THE ELECTORS CAN DO THIS IF WE DEMAND IT!

When you write postcards, please email me the NUMBER of the elector, so I can keep track.  After all, we don't want #1 Frank Burt Jr. of Alabama to get 100's, and #538 Teresa Richards of Wisconsin to get none.

At the bottom, along with the petition link, is my first postcard to that good ol' Alabama boy, Frank Burt, Jr.  Found his address on the internet.  Please send me addresses as you find them.

I think democracy would be a very good idea!  How about YOU? 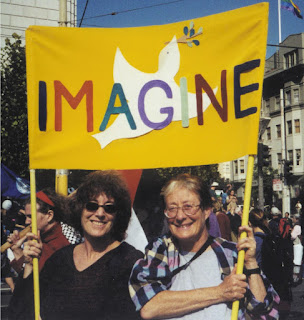 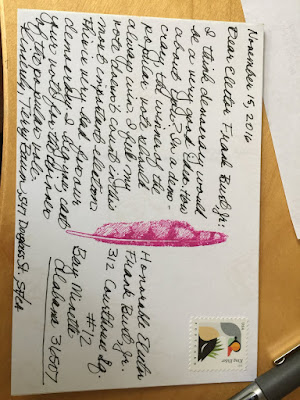 This is the text of my postcard: "November 15, 2016, Dear Elector  Frank Burt, Jr.:
I think democracy would be a good idea.  How about you?  In a democracy, the winner of the popular vote should always win.   I feel my vote doesn’t count in this most important election.  This is very bad for our democracy.   I beg you, please cast your vote for the winner of the popular vote.
Sincerely, Terry Baum, 547 Douglass St., SF CA 94114"

I love to make postcards out of my photos.  This is one of my dear sister Nancy and me at a demonstration against the invasion of Iraq.  Nancy made our banner.  I don't expect anyone else to go to all this trouble to create a postcard.  Unless you want to.  OK, folks, it's time for.. POSTCARDS FOR DEMOCRACY!

Okay, I'm clicking the button to send this, and then I'm mailing my first postcard.