We started Postcards for Democracy last night in my kitchen.  Diana Scott suggested we target the states where the race was closest:  Michigan, Pennsylvania, Florida, North Carolina and Wisconsin.  We really need the addresses for the bigger states.  Tara Ayres sent me a link to the addresses of the Wisconsin electors.  We'll post the other states when we get them..
Have a Postcards for Democracy Party!
All you need is:
1. Postcard stamps ("forever" or 34 cents)
2. Ten postcards for each guest
3. The address list below

Here is the text of my best effort:

"Dear Elector Buestrin:  Please consider casting your vote for the candidate who won the national popular vote by more the one million!
It is terrible that, in the U.S.A., every person’s vote is not equal.  How can we call ourselves a democracy?  You have the power to help correct this injustice.  Please use your vote to make democracy stronger.
Sincerely,Terry Baum, 547 Douglass St., SF CA"

Four women joined me:  Diana, Donna Mori, Pat Hendricks, and Margery Hilsenrad.  We each wrote 10 postcards -- one to each elector.   Our strategy:  Just talk about democracy and the fact that the winner of the popular vote should be President.  We did NOT attack Trump or praise the idea of a woman President.  Just democracy, folks.  We discussed what we each would write, but did NOT try to get a "perfect" standardized message.  That is not the point of POSTCARDS FOR DEMOCRACY.  We want the Electors to hear our individual voices.  I don't think everyone put a return address on.

It felt SO good to be doing something.  We were reaching out to the Republican THEM in a civil, calm way.   We assumed that the people we were writing to would be open to hearing us and to considering our ideas.  And, who knows?  If all the electors in those five states get 1000's of postcards -- it might actually change their minds!  If we can get 38 electors to switch their votes to the winner of the national popular vote -- We'll have elected the first woman President!   We need your help, folks, for this to go viral.

As always, it was just great being with others to work on change. Donna said today, "Even though I didn't know anyone, it felt like... Community." Everyone made a contribution.  Donna helped prepare for the party and volunteered to write addresses, since she had very clear hand-writing.  Diana steered us away from the many FDR postcards I had made to more neutral images.  Margery had a very UP strong attitude about what we were doing, even when Diana and I were plagued by doubt.  Pat brought food and gave me a good suggestion on tweaking my own message.  We had a great time chatting, about things political and otherwise.  Of course I had made an idiotic amount of food, as my religion requires, despite the fact that I hadn't invited anybody to dinner.

I actually sacrificed my beloved Gee's Bend Quilt postcards for the cause.  I hope the people who get them appreciate their special beauty. 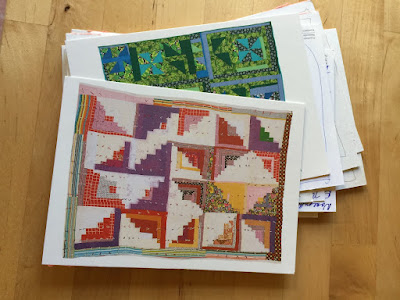 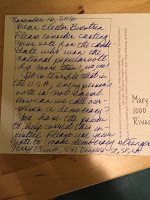