POSTCARDS 4 DEMOCRACY: It’s a party, it’s a movement, it’s…. SOMETHING TO DO!

WHAT IS “POSTCARDS 4 DEMOCRACY”?
We are very concerned (as in “freaked out”) citizens who are writing and sending hand-written messages on postcards to members of the Electoral College in Five Red states where the vote for the Presidency was extremely close. We are to encouraging them to cast their electoral vote for Hillary Clinton because she received 1.5 million votes more than Donald Trump. Here is a postcard I wrote: 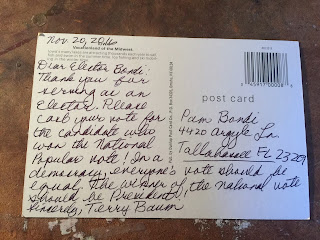 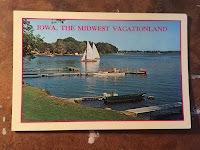 As you can see, I'm being polite and respectful because that's more likely to get the reader's attention and even consideration. “You idiot, do the right thing!” tends to be counter-productive!

THE SEVEN BENEFITS OF POSTCARDS 4 DEMOCRACY
1.    We might change history.  Admittedly it’s a long shot.  I won’t go into HOW long a shot it is.
2.    We’re planting seeds for a campaign to rid the U.S. of the tragic effect of the Electoral College by 2020. (Go to nationalpopularvote.com for the best idea).
3.    We’re building a culture of civility.
4.    We’re alleviating our depression and despair through activism.
5.    We’re gathering with like-minded souls to create COMMUNITY!
6.    We’re spreading beauty in the world through picture postcards.
7.    We’re supporting the U.S. Post Office, which could really use a helping hand.
WHAT’S NOT TO LIKE, FOLKS?!?

WHY ARE WE DOING THIS?
Currently, as instructed by the Constitution, the President is not chosen by the votes of the people but rather by the votes of each state's Electors. The Democratic and Republican Parties in each state have their own electors. For example, when you vote for the President in Wisconsin, you actually are voting for either the Wisconsin Democratic electors or the Wisconsin Republican electors.

The President of the United States will actually be elected on December 19, 2016 when the state electors vote. This system can result in someone being elected President who did not actually receive the most votes UNLESS WE CAN CONVINCE ENOUGH STATE ELECTORS TO ALIGN WITH THE NATIONAL POPULAR VOTE.
If enough Electors switch, we will have a democratically elected President! Want to do something about it?

WHAT DO YOU NEED?
1. Postcard stamps ("forever" or 34 cents)
2. Five or ten postcards for each guest if you're hosting
3. The address list below
I WILL REIMBURSE ANYONE FOR POSTCARDS AND STAMPS. HONEST. Email me your address and I’ll send you a check to reimburse you.

WHAT IS THE MESSAGE?
Your message should be personal to YOU.  Of course, discuss it with others, have people suggest, critique.  But we are going for NOT standardized here.
This is NOT about the candidates but about DEMOCRACY!
DON’T criticize Trump or even use the candidates’ names.
I refer to Clinton only as:  The winner of the national popular vote.
“In a democracy, the winner of the national popular vote should be President.”
“One person, one vote.”
“You have the power to strengthen our democracy.”
“Our democracy is in danger if the winner of the NPV does not become President.”
BE CIVIL.  We’re appealing directly to the goodness and fairness of another human being.  We are asking to be heard.
My best message so far:  "Dear Elector (name here):  Please consider casting your vote for the candidate who won the national popular vote by more the one million!
It is terrible that, in the U.S.A., every person’s vote is not equal.  How can we call ourselves a democracy?  You have the power to help correct this injustice.  Please use your vote to make democracy stronger.” (It was a big postcard.)
Definitely sign your name.  I also put my address.
Please, no address labels!  Hand-write entire postcard!

WHAT KIND OF POSTCARDS?
(The Post Office no longer sells postcards.)
1.    Easiest:  Buy packets of Avery (or other) postcards – 4 on each 8 ½ X 11 sheet.  200 in every packet.  Put address on one side, message on other.  They’re in the “label” section of office supply stores.
2.    Next easiest:  Buy picture postcards in drug stores, museums, gift shops.  Go for pretty, interesting, patriotic, nature, traditional art --  but NOT political, subversive, lefty, raunchy or boundary-pushing in any way.   Van Gogh: Yes.  Picasso: No.   San Francisco/New York City images: No. Everywhere else: Yes.
3.    Make your own picture postcards by printing out your 4X6 photos, and back them with 4X6 labels to make them sturdy.  I happen to have many 4x6 photos of my beautiful garden.  I have no idea why I printed out so many.  But I’m using them now.
The advantage of #2 & #3 is that you’re giving the Elector a little gift, putting out some beauty into the world.

THESE ARE THE IDEAS FROM THE FIRST “P4D” PARTY.  IF YOU WANT TO MAIL 2000 PICASSO POSTCARDS, PLEASE DO IT!

PLEASE TELL ME HOW MANY YOU MAILED TO WHICH STATES. We are keeping a log of how many postcards have been sent to which states.

With love and gratitude,

AND NOW, WHAT YOU’VE ALL BEEN WAITING FOR….