HILLARYCLINTON.COM/EVENTS.  TYPE IN YOUR ZIP CODE TO FIND LOCAL EVENTS.  DO SOMETHING.  IF YOU'RE IN A CITY IN A BLUE STATE, YOU CAN PHONE BANK FOR SURE IN BATTLEGROUND STATES.

I admit I let down my guard.  After the last debate, I thought it was in the BAG!  I mean, COME ON:


I woke up the morning after the debate with a smile on my face and a song in my heart.  I absolutely GORGED myself for breakfast on New York Times op-eds predicting Trump's catastrophic defeat.

Hey, let's face it:  even TRUMP thought he was a goner.
Sooo.... I didn't phone bank as much..... (well, really not at all until this Monday night)....  I procrastinated on writing a blog..... I prioritized all the little and big details of my life over getting out the vote for Hillary.

I'm back phone banking.  I highly recommend it.  It can be very rewarding.  I had a great discussion with an undecided voter in Arizona on Monday.  And just identifying Hillary supporters is CRUCIAL.  This is what the Democratic Party does best:  GOTV -- Get Out The Vote.   In order to do that, the voters must be identified before election day.  You can be part of that.  Yes, you can.

If you can actually get yourself to a battleground state to canvas and GOTV in person, that is super.  I'm going to Nevada with the Sierra Club on Friday and staying until it's over.  I'm hoping this knot in my stomach will untie itself if I'm putting boots on the ground with other folks.

For folks in Northern CA who'd like to canvas in Nevada, call 415 977-5678.  The Sierra Club is arranging car pools and subsidizing hotel rooms.

I talked to my good friend J, who in despair had withdrawn into reading the Wizard of Oz books (there are a lot of them).  He'd had a frustrating experience phone banking -- sometimes people are angry that you called them.  That's a drag. But, as I pointed out to J, that does not mean that they are unaffected by the fact that a human being, an actual human being, has reached out to them with a political position.  J's decided to phone bank some more.

I understand the desire to escape.  I myself have been reading Zen koans to relax.  I'm thinking of switching to The Wizard of Oz.

I mean, I'm not saying I'm working on the election 24/7.  But I got a knot in my stomach 24/7, a fear that the impossible, the irreversible might happen.

We cannot withdraw.  We cannot give up.  We cannot despair.  Oh, hell, alright -- DESPAIR!  I don't give a damn what you FEEL.  Just DO something!  Do something so that you can say "I did something."

And it is so GOOD to be with others who are doing something.  Did you know that activism is an antidote to depression?  I swear to you, it IS. Despair is impossible when you're surround by like-minded people DOING something.  Well, at least it's much less likely.

HILLARYCLINTON.COM/EVENTS.  TYPE IN YOUR ZIP CODE TO FIND LOCAL EVENTS.  DO SOMETHING.  IF YOU'RE IN A BLUE STATE, YOU CAN PHONE BANK FOR SURE IN BATTLEGROUND STATES.

Okay now, WHAT HAPPENED between the last debate and now?

The slow poisonous drip drip drip of those stupid fucking emails.  Thank you, Putin and Wikileaks.

Why does the NY Times put them on the FRONT PAGE??

Why aren't people outraged at our "free" press being a pipeline for Putin's interference in this election?  Okay, maybe they have to cover it.  But the front page?

Why doesn't Obama fire the director the FBI for what HE did?

Why doesn't somebody hold Trump accountable for his suggestion that someone assassinate the future President Clinton before she appoints someone pro-gun control to the Supreme Court? Isn't it a crime to threaten the life of the President, even when they DON'T do it on television for a mass audience of gun nuts?

Why doesn't Hillary get up on a table and DEMAND Trump's tax returns?

But this is not the time to devote ourselves to understanding what has happened.  This is the time for action.

HILLARYCLINTON.COM/EVENTS.  TYPE IN YOUR ZIP CODE TO FIND LOCAL EVENTS.  DO SOMETHING.  IF YOU'RE IN A  BLUE STATE, YOU CAN PHONE BANK IN BATTLEGROUND STATES.

A child handed me this wonderful brochure on Castro and Market.

Children were handing out these brochures to everyone.  This is the response of the 8th grade class at CDS Middle School to the election. 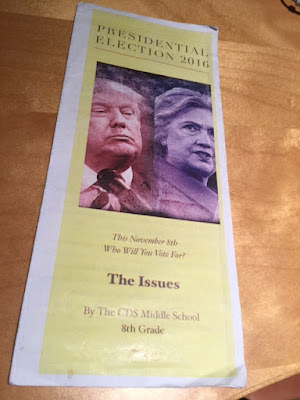 On each issue, they compare the positions of Clinton and Trump.  It's very informative, well-written.  I take it with me when I phone bank.

We are doing this for the children, right?  That's always the most important thing.  The children.  The future.  They're entitled to a decent world, don't you think?  I'm not saying this as a parent, because I'm not.  I'm saying this as a human being.